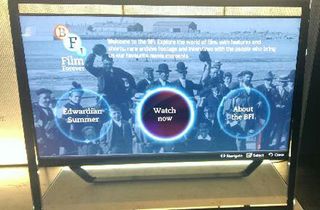 Available on Samsung Smart TVs, the BFI app includes rare Edwardian films from the Mitchell and Kenyon Collection, which dates back to 1904, plus regularly updated feature films and exclusive interviews.

Seven channels within the app will also showcase content from the BFI London Film Festival, which returns in October for 2013.

Highlights on the BFI Smart TV app at launch include conversations with John Travolta and Ridley Scott, Martin Scorcese's episode of Century of Cinema, and early short films and appearances from now established directors and actors such as Shane Meadows, Ken Russell and Daniel Craig.

Interviews and on-stage events from the BFI's annual programme will also make their way on to the app, with events featuring Danny Boyle, Michael Caine and Steve McQueen already available.

Arguably the highlight is the previously unseen archive content from the Mitchell and Kenyon Collection, the largest surviving collection of non-fiction films in the world.

The company, which was formed in Blackburn, Lancashire at the start of the 20th century, shot snapshots of British Edwardian life, from Blackpool Pier in 1904 to a Punch and Judy show in Halifax in 1901.

The BFI’s Digital Director, Edward Humphrey, said: "It’s thrilling to take the riches of film culture and especially British film into so many homes with Samsung.

"This new app gets Samsung’s customers closer to the BFI's rich and varied world of film. It’s a key step in realising the BFI’s ambitions for a wider suite of on-demand services, connecting audiences with our amazing content, no matter where they live in the UK which will continue to be brought to life in the coming months."