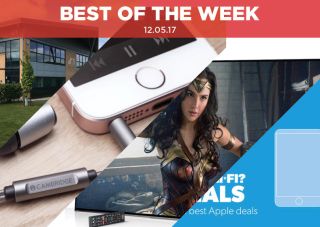 Following a limited edition run last year, Cambridge Audio has decided to give its SE1 in-ears a full release.

They're available to buy from Cambridge Audio's website, priced £68. Some of the proceeds will go to Youth Music, a national charity that invests in music-making activities for young, disadvantaged people.

Lionsgate has announced its first 4K Blu-ray in Dolby Vision - and that will be the latest Power Rangers film.

Dolby Vision is a version of HDR which enhances the lighter and darker aspects of an image. The disc will also use Dolby Atmos.

It's out in the UK on 24th July, almost two months after the release of Despicable Me, which will be the first title to feature Dolby Vision.

Netflix is set to add HDR support to mobile devices, though it comes with a caveat.

The HDR tech is thought to be exclusive (initially) to LG's G6, with support for other HDR-enabled smartphones in the pipeline.

There's no exact date for when HDR will arrive, but Netflix says it is "coming soon".

Sky TV is having a brief sale

Amazon announces new Echo Show in the US

Spotify Codes feature allows you to scan and share music

Users of BBC iPlayer will require a login from 2017

Spinbox is a turntable you build yourself

The best What Hi-Fi? deals of the month - May

Apple's latest tablet boasts few major updates - or, in fact, anything we haven't seen before. Despite that, it's still a force to be reckoned with.

The new iPad sees the A9 processor replacing the A8X, resulting in a faster and smoother tablet that offers the refined performance we expect from Apple.

It's cheaper than the Air 2, which means this iPad is better value for money.

The sound is a pleasing mix of insight and entertainment, and one few rivals can compete with.

For the price, we can't find any major issues with it.

After joining the 4K Blu-ray player market, Sony has jumped into the OLED market and its first attempt is fantastic.

The design of the TV is one to marvel at and the picture is just as good. With deep blacks and vibrant colours, it's a stunning image.

For the size and the price, this Sony is the new benchmark.