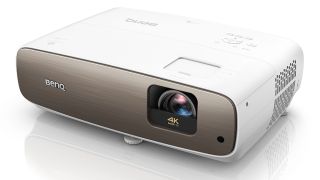 It’s been almost a year since BenQ entered the sub-£2000 4K HDR projector market – an increasingly burgeoning area of projection as 4K chips become more accessible for manufacturers, and more consumers demand the resolution. And the company's ambitions within that market are only growing.

As one might expect from a 4K projector, all three support HDR10 and HLG formats. But more unusual is their colour specification, which BenQ argues is at the core of their performance. The W2700 and W5700 are supposedly the first home theatre DLP projectors to support the DCI-P3 colour space, the American film industry’s digital film projection’s standard that has a 23 per cent wider gamut of colours than the older sRGB standard.

That, combined with BenQ’s proprietary CinematicColor technology and RGBRGB colour wheel, means the W2700 can produce 95 per cent of the colour standard, with the W5700 taking that further with 100 per cent coverage.

The W2700 has a shorter throw and built-in speakers, so it can sit relatively close to a screen and be used as a standalone all-in-one system. The W5700 instead forgoes audio duties, designed to be used in a home cinema set-up with an existing speaker set-up.

BenQ gave us a demo of the W2700 and W5700 next to a rival brand's similarly-priced models, and they were both impressive - admirably crisp and clean, and with a pleasingly rich-yet-natural colour reproduction that is punchy while remaining lifelike. We're encouraged.

Their £1500-2500 price tags make them natural rivals to our current Award winners, the Optoma UHD40 and Optoma UHD65, so we look forward to getting them into our test rooms very soon.

Could we have new What Hi-Fi? Award winners when November rolls around? BenQ sure hopes so.