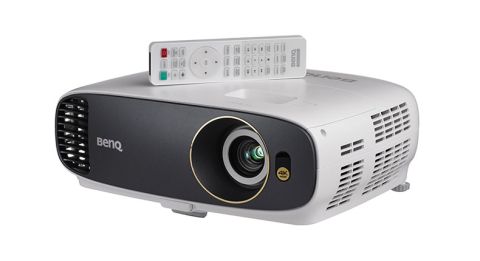 Bringing a 4K HDR picture to a new price bracket, the W1700 has a lot to offer

Last year, our favourite projector for under £2000 had a 1080p resolution and could only manage standard dynamic range.

This year, in a similar price range, there are a smattering of reasonably-priced projectors claiming both 4K resolutions and support for high dynamic range (HDR). How quickly things change.

One of first of the new guard to come through our testing room is BenQ’s W1700. While it’s not as spellbinding as we might hope, this projector still gives a strong performance.

The W1700 is around the size of a large handbag, so it should fit nicely on your living room table, and at just over 4kg, feels as though it has a good weight to it.

It also has the standard connections you would expect on a projector – two HDMI ports, a PC input, as well as its USB Type A port for powering streaming devices.

On the whole, the projector is relatively easy to use and quick to set up. Navigating through its menus is simple and the remote, which has a handy backlight button for use in the dark, responds well.

The W1700 isn’t particularly quick off the mark to start up and, like many projectors, there is some degree of noise from the fan, but these certainly aren’t deal breakers in our eyes.

The projector’s 4K resolution comes from a single 12mm DLP (Digital Light Processing) chip that, while not native 4K, can be used in conjunction with fast-switching mirrors which deliver multiple pixels per frame to the screen, that allow it to deliver a full 4K resolution.

It’s similar technology to that we’ve seen on other 4K projectors last year, including the award-winning Optoma UHD65, and is enough to get certification from the Consumer Technology Association (CTA) in the USA.

Similarly, the projector’s HDR capabilities also come with some caveats: the company says the W1700 is ‘supercharged by HDR10 support’ – HDR10 being most common form of HDR.

In order for a product to meet that standard it must have a BT.2020 colour space, however, the W1700 isn’t able to fully reproduce that colour spectrum. While this projector will take a HDR10 signal from your Ultra HD Blu-rays or streaming services, you won’t get the full range of colours.

On the sonic side, there’s a built in 5W speaker, but we’d always recommend pairing any projector with some suitable speakers and a good amplifier rather than relying on its small drivers.

Setting up the projector is a straightforward process. Although there are a number of extra settings to adapt the image to your surroundings we find that many of them aren't necessary to get a satisfying image.

When pushed, both the colour and pixel enhancer settings make the picture look unnatural and overly sharp, while the flesh tone calibration makes pinkish skin look a little sunburned.

Once we have optimised the image to our test room settings, and punched up the sharpness a little, we play Edgar Wright’s Baby Driver on Ultra HD Blu-ray.

The W1700 brings up an insightful image with lots of detail. The wisps of Baby’s brown fringe stand out against his pale face, and gems on his sparkly pink iPod glint nicely.

Later, when Baby is courting Debora in a laundromat, the distinct reds, blues and yellows of the clothes punch out against the reflective silvers and greys of the washing machines with a reasonable amount of vibrancy.

However, we would like a more bombastic approach. There are occasions when we are left yearning for blue skies to pop a little more, or for the red of Bats' jacket to really shimmer in the light of the diner.

In our opinion, the picture doesn’t quite live up to BenQ’s claims of ‘supercharged HDR’.

We’d also like more insight in darker scenes. As the light falls across Baby’s face when he’s talking to Doc (Kevin Spacey), it’s difficult to make out any greater detail. Similar issues are found trying to separate the blacks of Doc’s suit with the gloom of the surroundings.

Switching down to a Blu-ray of Thor: Ragnarok, much of the character we like in the Ultra HD picture is brought to lower-definition content.

Colours still come across well in the light – you can see the shades of white in the lightning as it crashes down from the sky – but once again the W1700 falters a little in the darkness. The browns, blacks and blues of the occult house of Doctor Strange all merge a little in the murk.

The W1700’s upscaler does a commendable job recreating the absent pixels, though, with the blades of Norwegian grass or the white strands of Odin’s faded beard keeping quite a sharp tone. It’s not quite as crisp and clear as native 4K content, but that’s to be expected.

And even challenging it with a DVD of The Truman Show, the W1700 keeps up.

We’ve seen other projectors struggle with the fabric on his suit or the walls of his office, but it’s perfectly watchable here – and any excess noise can be removed with the noise-reduction feature with only a little loss of detail.

But one area that lets this projector down is the way that it handles motion. There is a lack of image stability during busy scenes.

Watching waves breaking on a beach or the movement of a tusk fish through the ocean in Blue Planet II make your brain work just a bit harder.

For some motion you won’t notice it – a scampering crab comes across smoothly, for example. But during scenes where there's a flurry of movement, it can be a distraction.

Make no mistake, this is a good projector for the money. Skin tones are balanced, there’s a good level of detail, and its upscaler is of a reasonable quaility that means even your DVD library won’t go to waste.

There are a few aspects that we’d like to see improved, but on the whole, for anyone looking for a projector with a reasonable price tag that’s packed with features, the W1700 is one to consider.