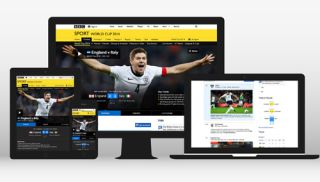 It's now just a couple of days until the 2014 World Cup kicks off in Brazil, but the BBC and ITV have already switched their attention – temporarily, of course – to the 2018 and 2022 tournaments.

The pair have shared the UK's TV broadcast duties for 13 straight World Cups – beginning with the famous 1966 event – and have confirmed that'll become 14 with the 2018 World Cup in Russia.

MORE: How to watch the World Cup on TV, in 4K, online and on mobile

UK television viewers will be able to follow the action with BBC and ITV as part of a new agreement with football's world governing body FIFA, which also comprises online and radio coverage too.

This latest agreement also encompasses the 2022 World Cup, which is due to take place in Qatar – but recent developments in the media mean we probably can't say for certain that'll be the case.

BBC director of sport Barbara Slater said: "It's fantastic news that the pinnacle event in world football will continue to be available free of charge for everyone in the UK."

ITV director of sport Niall Sloane added: "The excitement building on the eve of this summer's tournament in Brazil demonstrates how the FIFA World Cup offers a shared, collective experience for people across the UK."

By the time the 2018 tournament rolls around, the BBC will have long known the results of its Ultra HD 4K broadcast trials that are taking place from Brazil this summer – albeit in private.

When the world footballing fraternity gathers once more in four years' time, will 4K proven itself to be a winner or will it suffer the same fate as 3D? The 2014 World Cup might well have the answer.