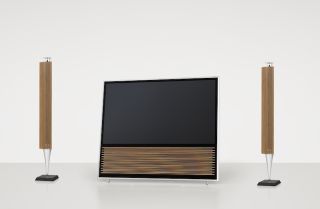 The BeoVision 14 is the latest high-end television from Bang & Olufsen. There are two sizes available, 40in or 55in, and the company has put a lot of work into ensuring that this television "brings pleasure even when it’s not playing", similar to what Loewe aimed for with the Bild 7.

The more expensive models come with ultra-thin oak panels on the front covering the three-way speaker that sits underneath the screen - a choice of different coloured cloth speaker covers is also available at a slightly lower price.

Unlike the OLED-equipped Loewe Bild 7, the B&O BeoVision 14 uses an LED-based LCD panel designed to negate 98 per cent of "annoying" reflections. Like many of today's high-end televisions, the BeoVision 14 can display 4K Ultra HD images and video and is powered by the Android TV platform.

It also has an HEVC decoder, so it's able to stream 4K content from Netflix and Amazon Prime, and there's built-in Google Cast for streaming audio and video from your smartphone or tablet to the TV.

Additional features include a "360 degree Automatic Picture Control sensor" which adjusts images based on the surrounding ambient light.

The remote control has also had a redesign, and now has four "MyButtons" which allow you to quickly change between video settings.

You can hang the B&O BeoVision 14 on the wall, place it on a conventional stand or specify it with an optional motorised floorstand (pictured above).