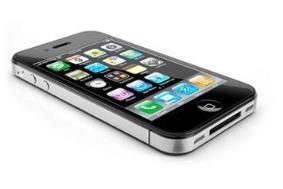 20.00: Jobs is wrapping up now. So that's it. No new Apple TV or music streaming on iTunes. Still, the new phone looks pretty nifty. Naturally we'll be bringing you a full review just as soon as we can get our hands on one.

Right, we're off to get something to eat. Thanks for joining us.

Not all features of iOS 4 are supported on the iPhone 3G and the second-gen iPod Touch (first-gen Touch doesn't handle it at all). The good news is that second-gen Touch owners will get the iOS 4 upgrade for free. iOS 4 will be available for current iPhone owners from June 21st.

19.35: One more thing... video calls. Jobs calls Jonny Ive and they video chat with each other on their new iPhones. Nifty. It's called FaceTime, and will work via wi-fi on any iPhone 4 to iPhone 4 calls with no set-up required.

Wi-fi only at this stage. "We need to work a little bit with the [mobile phone] carriers," explains Jobs. Uses front and rear cameras, can be viewed portrait or landscape.

19.25: Jobs explains iAds "Why are we doing iAds? To help our developers earn money." Fair enough. iAds is built in to iOS 4. Apple sells and hosts the ads, which remain within the app. Share of revenue goes to the developer.

iAds will be turned on for all iOS 4 devices from July 1st. Jobs claims they've already got $60m of ads committed. He predicts iAds will represent 48% of the mobile advertising market in the second half of 2010.

iBooks is coming to the iPhone 4 too. Same bookshelf display as on the iPad, PDF reader, iBookstore on your phone. You can purchase and download a book on iPhone and iPod touch. Plus you can download the same book to al your devices at no extra charge. iBooks will also allow you to add bookmarks and notes, and wirelessly transfer them between devices via wi-fi.

There's a whole new camera system too: 5 megapixels, as expected, but with a "backside illuminated sensor", LED flash, 5x digital zoom, tap to focus function. And it records HD video, 720p at 30fps.

18.35: "Now we're introducing iPhone 4. In 2010 we're going to take the biggest leap since the original iPhone. Glass on the front and back, steel around the sides. It's like a beautiful old Leica camera."

He confirms front-facing camera, micro SIM tray and LED flash on the back. Plus noise cancellation mic.

New versions of Farmville and Guitar Hero coming to the iPhone/iPod Touch this summer.

18.20: Now Jobs want to talk about Netflix on the iPhone. Reed Hastings from Netflix is on the stage: "We've just launched Netflix for the iPad, and I'm happy to announce Netflix for iPhone coming this summer."

Users will be able to pick up their viewing from where they left off when switching between iPad and iPhone.

18.15: "We support two platforms: HTML5 – it's a completely open, uncontrolled platform. And the App Store." No mention of Flash then, Steve.

18.05: As expected, Job starts with an update on the iPad. They're selling one every three seconds apparently. "It's a whole new way to interact with the internet, apps, content and media."

There are now 8500 iPad apps in the app store. iPad apps have been downloaded more than 35 million times, which equates to 17 apps per iPad.

18.00: Delegates at the WWDC are being asked to turn off their moble phones. The man himself steps on to the stage. Let the fun begin!

17.45: Apple boss Steve Jobs is due to take to the stage at 6pm UK time to give his keynote address at Apple's Worldwide Developer Conference (WWDC), so we'll be posting regular updates here on the site as the news unfolds.

What we know so far is outlined below, but we'll bring you confirmation of developments as soon as they happen. Will the new iPhone live up to the hype? Will we see an improved version of Apple TV? And will we finally get streaming music on iTunes?

Stay with us throughout the evening to find out what's happening.

10.00: Steve Jobs is expected to unveil the fourth-generation Apple iPhone today at the company's Worldwide Developer Conference in San Francisco.

Many details have already been leaked online after a member of Apple's staff lost a prototype in a bar near the firm's HQ.

The new iPhone 4G (or HD) is likely to have a larger screen with up to four times the resolution of the current model (960 x 460 pixels), a five-megapixel camera with flash, noise cancellation and longer battery life. Other key attributes may include:

• A glass back that improves phone reception
• Micro-Sim cards, like the iPad
• The same A4 processor as the iPad (that means a much faster phone)
• iChat software will enable video chat with other iPhones and desktop Macs
• Two models: 32GB and 64GB
• Available through the existing retailers: Orange, Vodafone and O2

There is also speculation that Apple will stop making the 16GB and 32GB versions of the current iPhone 3G S, with the cheaper 8GB 3G S becoming the company's mainstream iPhone model and the new larger capacity 4G the flagship one.

We'll bring you regular updates from the Apple launch from 6pm tonight here on whathifi.com.