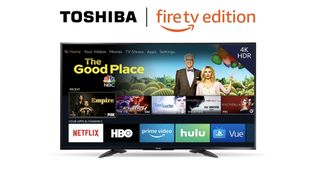 Amazon partnering with TV manufacturers to sell cheap 4K TVs integrated with its Fire TV streaming platform is nothing new – such streaming-savvy TVs have been around for a few years. However, now is the first time Amazon has released a model with support for Dolby Vision.

For the uninitiated, Vision is Dolby's HDR (High Dynamic Range) format, which offers a greater spectrum of colors and higher contrast than typical content. Because such improvements in picture quality are 'dynamically' made on a scene by scene basis, as opposed to only once at the start of a piece of content, it is considered an advanced form of HDR compared to the standard HDR10 format, too.

As with Dolby Atmos surround sound, Dolby Vision support is widely available in premium-level smart TVs. But its inclusion at the lower end of the TV market is still relatively rare. A handful of TCL Roku TV offer Vision support, and now Amazon is joining the party.

The first of a trio of Toshiba-branded Dolby Vision sets released by Amazon is a 55in model, available now for $450. Two smaller variants – 50in ($380) and 43in ($330) – are slated to arrive on 30th June. "Just in time for Amazon Prime Day," we hear you say. Indeed, it wouldn't surprise us if Amazon shed tens of dollars off those prices during the Prime Day sale next month.

“In launching our products over the last year, we’ve wanted to make sure they follow our philosophy: simpler and smarter,” said Sandeep Gupta, Amazon's vice-president of Fire TV development: "We worked closely with Best Buy [exclusive retailer of Fire TV Edition smart TVs in the US] and Dolby to build an amazing TV."

It comes as the company prepares to launch an installation at the Dolby experiential space in New York to showcase the viewing experience you’ll get with Dolby’s audio and visual technologies on recent Fire TV hardware.