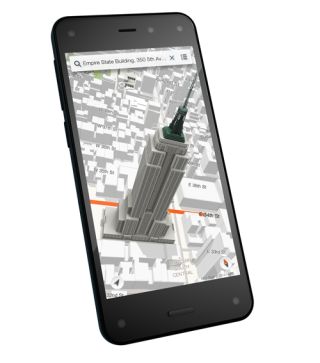 After cracking the tablet market with the Kindle, online retail giant Amazon has announced the launch of the Fire – its first attempt to grab a slice of the increasingly lucrative smartphone market.

Amazon will no doubt face stiff competition from established handset manufacturers, but it's hoping "two new breakthrough technologies" will win people over.

One of the Fire's two innovations is Dynamic Perspective, which uses four ultra-low power specialised cameras and four infrared LEDs built-into its front face, plus a dedicated custom processor.

Its features include 3D visuals that changes the perspective of an image when you move your head; a part of the one-handed gestures feature that reacts to actions such as tilting and swivelling.

Dynamic Perspective also promises immersive apps, games and an enhanced carousel that will provide real-time updates from the home screen and allows apps to respond to the actions you make.

Amazon says that means you can make a call using a number printed on a physical poster, or draw up information about an artist based on what track you're listening to and much more.

In terms of its specifications, the Fire houses a quad-core Qualcomm Snapdragon 2.2GHz processor; a 4.7in HD display; 4G connectivity; and dual stereo speakers with Dolby Digital Plus.

And if you pre-order now, you will get a 12-month subscription to Amazon Prime as part of a limited time offer – meaning unlimited streaming from the Prime Instant Video and Music services.

We're still waiting to hear when the Fire is coming to the UK – and if it will be priced just as competitively here, as it appears to be in the US.