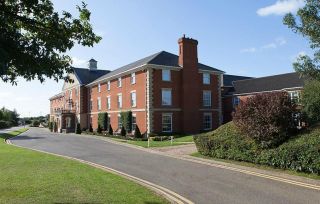 Situated next to Silverstone racetrack - as the noise from the British Touring Car weekend confirmed - it’s a decent venue, with good size rooms that don't sound too bad for a hi-fi show hotel.

Over the years we’ve noticed the gradual appearance of newer, more specialist companies at the show, and this year was no exception.

One pleasing factor was the abundance of turntables in residence in the majority of the rooms – often side-by-side with MacBooks, DACs and headphone amplifiers – demonstrating the current trends in the hi-fi world. Here are our highlights from this year's National Audio Show.

Roksan demonstrated this rather cool edition of the Radius 7, known as The Pink, partnered with Roksan’s new Blak integrated amplifier.

Sporting a striking shade of pink to the glass effect plinth and a matching Nima tonearm, The Pink gained plenty of positive attention.

Not only was the look something refreshing, but with a donation from each sale of The Pink being given to the UK-based Breast Cancer Care charity, it could also be an industry first.

The price is identical to the standard finish Radius 7 at £2,015, and includes the pink Nima tonearm.

Designed and built in the UK, the unit uses the same attenuation transformer as the Classic preamplifier, but with the addition of an active headphone output.

A toggle switch on the back of the unit allows the user to select “main system output” to drive power amps and loudspeakers, and at the flick of a switch, they can mute the main system and use the built-in headphone output.

The result – demonstrated with a Sony Walkman Pro cassette (!) as the source – sounded spacious with good clarity.

Although part of the company’s Unico valve/solid state ‘hybrid’ range, the company claims that, in terms of performance, the Unico 90 is the most 'valve-like' in the series.

Featuring two ECC 83 and one ECC81 triode valves per channel in the input stage (in Totem pole configuration) and using high-quality German Mundorf components, it claims to have a unique circuit delivering 160W per channel. You'll have to pay £3,500 if you want to decide for yourself how good it sounds.

A new name to us at the show was Code Audio. Founded by Ceri Thomas, an automotive engineer with a background in the sportscar industry. And it was definitely one of the more interesting rooms.

The company designs and makes modular active loudspeaker systems powered by an off-board module, as opposed to internal amplification like most active designs. This control box consists of a six-channel DSP crossover, a digital preamplifier and six-channel class-D power amplifier.

Two systems were demonstrated, the System 1, an active bookshelf pair at £5,495 for the control unit and the speakers, and the System 2, which comprises the System 1 plus one external BASS-2 bass cabinet each side (estimated around £10,000 total).

Additional bass units can be added in the modular system to incorporate the future System 3 (four bass units) and System 4 (eight bass units) configuration for which extra power amplification is supplied. System 4 will retail for around £20,000.

Teddy Pardo isn’t a name we were familiar with, but the Israeli company produces neat-looking and, from what we heard, neat-sounding DACs, electronics and speaker systems.

Both the sound and the understated look resemble certain British designs of the not-too-distant past.

In the Sound Fowndations room we came across the intriguing Larsen loudspeakers from Sweden.

With a heritage that stems from the offbeat Stig Carlsson designs of the 1980s, the models are designed to be placed against a rear wall, where they “work with, rather than fight, sound reflections”.

This design ethos leads to their unique, rather cool and decidedly Scandinavian angular look that wouldn’t look out of place in a trendy loft apartment.

Contributing to the increased presence of all things vinyl were two contrasting new turntable designs from fledgling British companies.

The first is from Oxford-based company Planalogue. Its debut product, the Prelude, is a belt-drive design housed on a ‘control’ platform.

It features an external power supply and speed control with electronic switching between 33 and 45rpm, a fully isolated motor and a layer plinth constructed from acrylic and birch ply.

At the show, it was partnered with a Japanese-made Abis tonearm, but with matching arm mounts available. The Planalogue Prelude is priced £2,295.

Higher up the scale is the impressive looking CUE turntable from ONKK. The CUE is a British-made and designed, direct drive turntable. The chassis is cast aluminium, the bearing is ceramic and the chunky platter is copper-plated. The ONKK CUE costs around £16,000 without a tonearm.

As well as being an audiophile designer, founder Paul Beckett is a bespoke clock maker, with Heston Blumenthal’s ‘Dinner’ restaurant in London housing one of his creations.

And with the current wave of vinyl interest, the timing of the CUE could be perfect...