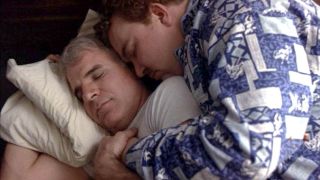 Watching a Christmas movie is almost as much of a tradition as turkey and presents, but what to watch? Allow us to run through our personal favourites...

Some are stone cold Christmas movie classics, while others, perhaps less obviously associated with Christmas, also make the list.

Take a look at our 8 gift ideas for film fans if you're after some fresh home cinema kit this Christmas.

See them all: Christmas Gift Guide 2014

"It's quite possibly the best Dickens adaptation put to film. Michael Caine joins the ensemble cast of The Muppets to faithfully recreate the classic Christmas tale - but with the family-friendly tomfoolery that you'd want (nay, demand) from the Muppets." (Pete Hayman, Content Editor)

"Will Ferrell (in yellow tights) is a havoc-wreaking human outcast in the Elf-populated North Pole before he leaves for New York to find his long-lost biological dad – and causes mayhem in every hop, skip and jump along the way.

It's a Christmas comedy classic, and is undeniably the funniest and most endlessly quotable festive film out there – 'Buddy the Elf, what's your favourite colour?'; 'The best way to spread christmas cheer is singing loud for all to hear'; 'Oh my god! Santa's Coming! I know him!'. The list goes on, but I won't." (Becky Roberts, Staff Writer)

It's A Wonderful Life

"The quintessential Christmas movie. James Stewart in peerless form as the man who feels trapped in his small town, but doesn't realise how much he is loved by the townsfolk.

"It's often a dark tale, with depression and suicide to the fore, but there are guardian angels too – and the joyous denouement will bring tears to all but the stoniest heart. Christmas fare at its finest." (Jonathan Evans, Managing Editor)

Buy It's A Wonderful Life at Amazon

"The tragic tale of an ambitious international businessman, who has his holiday plans ruined by a swearing wife-beater before dying, hard. A timeless Christmas tale, and one to watch with a box of crackers." (Ced Yuen, Staff Writer)

"His name's in the title, but Batman's a supporting player in Tim Burton's ever-so Gothic sequel that takes the DC hero into stranger, weirder and (sometimes) kinkier territory.

"Bring the whole family round and plonk them in front of that Award-winning TV and remember the time before 'Bat-nipples' became all the rage." (Kob Monney, Buyer's Guide Editor)

"A modern take on the classic Dickens' tale, 'Scrooged' features a crazy-haired Bill Murray in the role of a twisted and embittered TV executive, who experiences a Damascene conversion on the spirit of Christmas, following a ghost-guided journey into the dark night of his soul.

"The movie has a black edge, but it's also very funny. And if Murray's monologue at the end of the film doesn't pump the joys of Christmas into your veins, then you'll want to check your pulse." (Niall McGarrigle, Sub-Editor)

"A seriously funny and quotable movie that sees Eddie Murphy and Dan Aykroyd have their lives and social status reversed by the Duke brothers as a social experiment. Learning of their game, Murphy and Aykroyd create a plan of their own to prevent the Dukes from cornering the stock market for frozen orange juice (erm, just watch it...).

"The highlight has to be Dan drunk and dressed as Santa Claus, taking a salmon from his jacket, getting it tangled in his wet and dirty beard and taking a bite." (Max Langridge, Editorial Assistant)

"A boy builds a snowman. It comes to life. Everybody cries at the end." (Joe Cox, Digital Editor)

Buy The Snowman at Amazon

"We’ve all had a killer commute, but nothing compares to the trio of traumatic attempts made by Neal Page (Steve Martin) in an effort to get home for Thanksgiving. To make matters worse, he can’t seem to shake a very jovial John Candy, whose character happens to be heading in the same direction.

"Thanks to a huge clash of personalities, their journey gets off to a hilariously rocky start, but finishes with a heart-warming ending." (Andy Madden, Reviews Editor)

"Kevin ends up in New York City, where he continues his reign of terror on two hapless thieves just in time for Christmas. Double the shenanigans of the first film, with hilarious hotel staff, a building full of nefarious traps, pigeons, and cartoon violence at its finest.

"Do you believe? Six-year-old Susan has her doubts about the existence of Santa Claus, until she meets the real deal, who has been hired by big department store Coles to be their Santa Claus for the holiday season. Kris Kringle, played by Richard Attenborough in this 1994 remake, makes no secret of the fact that he is the real Santa, and while the crowds initially love him, his insistence soon has people questioning his sanity.

"After being set up one night, he is arrested and charged with assault. With prison time threatening to cancel Christmas, the only way to get him off is for a lawyer (Susan's mother's boyfriend) to prove to a judge that not only is Santa real, but that Kris really is him..." (Verity Burns, Multimedia Editor)

Buy The Miracle on 34th Street at Amazon