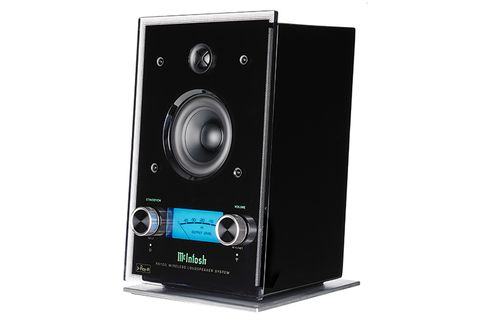 We first listened to McIntosh’s RS100 wireless speaker six months ago, and it’s safe to say we were underwhelmed.

To our ears it didn’t sound broken in any way, it simply sounded inadequate.

But McIntosh has assured us our review sample was faulty (it blames careless couriering), so we’ve agreed to take a listen to an RS100 McIntosh says is working perfectly in every respect.

But before any critical listening takes places, we’re duty-bound to pile in with our issues again.

The RS100 costs £1000, but in terms of its perceived value, we wonder whether you’re getting your grand’s worth. It’s seamlessly finished, it has that desirable greeny-blue McIntosh logo and trademark VU meter, and it’s startlingly hefty when you pick it up.

But fundamentally, it’s a standard-size speaker featuring more Perspex than is good for it. The fascia controls don’t feel special in any way, and placed next to Naim’s £900 Mu-so, you’d struggle to convince yourself the RS100 looks competitive.

Being the most affordable McIntosh product you can buy, doesn’t automatically make this a bargain.

Then there’s the feature set. We’ll be invoking Naim’s Mu-so once or twice in the course of this review, because the Mu-so is the current template for how a £1000ish wireless speaker should look, feel and perform. It’s also crammed with connectivity and functionality.

It has a mono RCA input, so you need an adapter to physically connect stereo sources. It has a subwoofer output.

But there’s no 3.5mm input, no ethernet socket for a more stable network connection – everything has to happen wirelessly.

However, there’s no Bluetooth and no Airplay either.

And there’s no facility for playing hi-res audio natively beyond 24-bit/96kHz – 24-bit/192kHz files are downsampled, and beyond that the RS100 is flummoxed.

MP3, AAC, FLAC and WAV are the only file types supported. It’s a feature set we’d find disappointing in a wireless speaker costing less than £500.

These strictures seem to be dictated by DTS Play-Fi, the third-party app used to control the RS100’s set-up and playback.

Download Play-Fi onto your phone or tablet to hook the RS100 onto your network – it doesn’t take a moment and the set-up process is reasonably swift and painless.

From there, you have a selection of streaming services (including Spotify and Tidal) alongside internet radio and any music you have stored on NAS devices.

Play-Fi also allows you to arrange as many as 16 RS100s in a multi-room configuration or set up a couple as a stereo pair. Play-Fi is stable, logical and straightforward – just as well, as the McIntosh doesn’t come with a remote control.

So with a sense of anticipation we feed to RS100 a standard, CD-quality 16-bit/44.1kHz Tidal-derived file of LCD Soundsystem’s You Wanted A Hit.

Immediately the aspects of the McIntosh’s sound we admired first time around – weighty, agile bass plus out-and-out loudness – are apparent. The RS100 certainly puts some meat on the low-frequency bones of the tune.

But while this RS100 is less compromised than our first review sample, there are still numerous areas of its sound that disappoint at best and aggravate at worst.

Switching to music that showcases a vocalist – Billie Holiday’s You’re Just A No Account and The Shins’ Pink Bullets – reveals the McIntosh’s rather careless way with midrange detail.

Nuances and subtleties of delivery are alluded to, hinted at but never made explicit – it’s impossible to make Billie Holiday sound less than characterful, but the RS100 gives it a go.

There’s a lot less grit to the treble here compared to our original example, but it’s not particularly refined.

A brash, crashy recording like a hi-res file of Queen by Perfume Genius reveals some residual grain in the McIntosh’s high-end sound, and an ever-present threat to spill into coarseness that’s never quite delivered on.

The RS100 can’t rival the Naim Mu-so’s combination of high-end substance and refinement.

There’s a deal more dynamism on show here than we heard previously, which can only be a good thing. The peaks and troughs of Charles Mingus’ Tijuana Gift Shop are communicated well, and this time the RS100 doesn’t lose its dynamic composure when the volume is wound northwards.

It has no problem differentiating the strength of string plucks or drum hits, and as a result is a far more convincing listen in this respect that the previous sample we heard.

But its inability to organise a recording properly remains almost as pronounced as it was six months ago. Once through UB40’s King is enough to reveal the RS100’s lack of expertise in this discipline.

Not only does the bass sound remote and estranged from the rest of the instruments, it actively fights against them, pulling at and corrupting the tempo. The RS100 is able to turn a loping skank into a lumpy, ill-timed and borderline-incoherent mess.

Overall, this RS100 is significantly better than the faulty sample we were landed with six months ago and, consequently, is a more competitive proposition. But it’s not good enough to justify its price, not by a long chalk.

It’s too pedestrian in too many ways – looks, interface, detail retrieval – and still struggles to present a song as a coherent whole. So, for the final time in this review, we’ll point you in the direction of the Naim Mu-so instead.

See all our McIntosh reviews