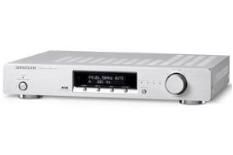 Provided you can feed it with a decent signal, this is a good way to bring quality radio into your life

There's a healthy debate about the quality of digital radio: at its best, using high bit-rates and with a strong signal, it sounds great. But cram too many services in the available bandwidth – which happens plenty during a glorious summer of sport – and digital radio suddenly doesn't sound so good. That's why a combined DAB/FM tuner is great.

The ST7001 tuner uses strengths gleaned from Marantz's CD players, offering short, mirror-image signal paths, plus high-quality power supplies. On the convenience front, there are 200 presets, remote control and simple, logical operation. Analogue and digital outputs are provided, and there are separate aerial inputs for FM, DAB and medium wave.

Outdoor antenna required
However, it's signal-hungry, its FM section only thriving when used with an outdoor antenna, when it turns in a sound that's as enjoyable with Radio 4's speech and drama as it is with live music performances on Radio 3.There's not much it can do with compressed pop stations, mind, but with better-quality broadcasts, it sounds well-weighted and decently detailed.

Some rivals might be capable of more insight, but the Marantz delivers an easy-going and refined listen. That's especially true with Radio 3 on FM, where the live concert atmosphere is delivered in a most pleasing fashion.

Used with an outdoor aerial, DAB reception is good, too, though the digital versions of these stations have a slightly drier sound than the analogue, with a fraction less presence and overall ambience.

This is a decent tuner with a strong array of features, but cheaper rivals are just as capable. Hence the lack of a fifth star here.