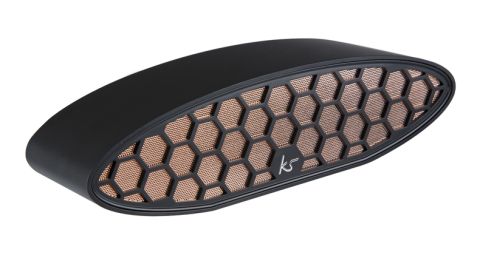 It’s well balanced and well built, but the Hive Evolution lacks the audio reach and upper sweetness of the best around

The KitSound name may not be familiar to you, but it's probably only a matter of time.

The Hive Evolution is, at the time of writing, one of 26 portable speakers currently on the company’s UK website – so expect to see one on a shop shelf near you at some point in 2017.

What may prove more of a challenge is immediately recognising one of these 26 speakers as a KitSound product without the benefit of first spotting the ‘ks’ logo.

The various visual styles offered are, shall we say, disparate. Check out, for example, the portable radio-aping, entirely made of wood, KitSound Soul.

Or the Invader, which, to our eyes, looks a lot like the plug to an airbed or dinghy.

Our feeling is that KitSound is trying to please everyone all at the same time – but not necessarily with the same product. So whom is the Hive Evolution aiming to satisfy?

The price – it’s one of its maker’s most expensive portable speakers – and build make us think it’s going for the more discerning buyer. You and us? Maybe.

The aluminium chassis is a good start. Cool to the touch, it carries an air of quality and it’s one of the better-looking units in its price bracket.

KitSound also adds that the speaker’s monocoque design – as in, a structural system where loads are supported through an object’s external skin (thanks, Wikipedia). As well as reminding us of the B&W T7, it also ensures that the weight is evenly distributed, making this speaker durable and robust.

Essentially, though we certainly don’t recommend it, if you find yourself needing to stand on a portable speaker to reach the top shelf, then this one would probably be up to the task.

When you’re done standing on the Hive Evolution, take a peek round the back of its honeycombed front and you’ll find an almost matching fascia, with the addition of space for charging its battery, plus connecting devices via the bundled 3.5mm aux-in cable.

In addition to omnipresent Bluetooth, you can also (virtually) hook-up via NFC, assuming your partnering device is suitably equipped.

The supplied carry case is a nice touch. Its maker points to the Hive Evolution’s durability, but this hard-shell case won’t do any harm in helping to prevent your fine-looking speaker from picking up unsightly scratches while on its travels.

On the subject of travels, the package also includes slot-on global adapters for foreign climes and their variously-shaped mains sockets.

To help deliver your music the Hive Evolution chassis houses an amplifier capable of up to 20W of power, and operates a pair of passive bass radiators.

That bass configuration does deliver a sound bigger than the uninitiated may first expect.

But we’d like even more reach and spread. Jimmy Scott’s Nothing Compares 2 U cover is always a good listen, but here we’d like a little more depth with those bass notes.

More definition, too. Lower notes can be a little indistinct, not starting and stopping with the exactness of the best in class.

Scott’s cover of Prince’s tune also exposes the Hive Evolution’s upper-midrange and treble. There is an edge to some of the vocals, just a little hardness that’s not present with the best wireless speakers at this price.

This is not a scarce trait in sub-£150 Bluetooth speakers – the designers are working within pretty strict budgets after all – but do your homework and it can definitely be avoided.

This KitSound speaker does lots right, though. Its balance, though not ‘acoustically perfect’, is enjoyable.

And levels of detail impress – listen out for the gentle percussion on Scott’s track and it’s there, well presented - and the rhythm and timing of your tunes are relayed accurately enough.

The KitSound Hive Evolution is an example of how far portable Bluetooth speakers have come.

Rewind a few years and this likeable unit would rate higher.

But up against products such as the JBL Charge 2 Plus, the Cambridge Audio YOYO (S) and even the (significantly cheaper, but remarkably capable) Ultimate Ears Roll 2, it can’t quite justify its £130 asking price.

See all our KitSound reviews