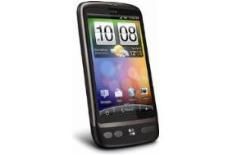 Extremely impressive as a phone, but not the best all-rounder

But it's no economy special: sporting a 3.7in OLED screen and Android 2.1 (for now), it's exceptionally powerful and flexible – if less sexy than the recognised class-leaders from Apple and Samsung.

The Desire's image quality is certainly impressive: while the screen's smaller and offers less contrast than its peers, it's sharply defined and smooth, with minimal motion judder and decent punch.

Loading video is a simple matter of drag-and-drop from your PC/Mac, and while there's no iPlayer app yet, it surely can't be too far away. It's odd that the video player is buried within the photos folder, though.

The supplied 512MB memory isn't great, although it's easily upgraded to up to 32GB with a bigger Micro SD card.

Music? More of a mixed bunch. Again, the supplied earbuds aren't up to much, but even with better headphones, the Desire's sound is inoffensive rather than inspiring.