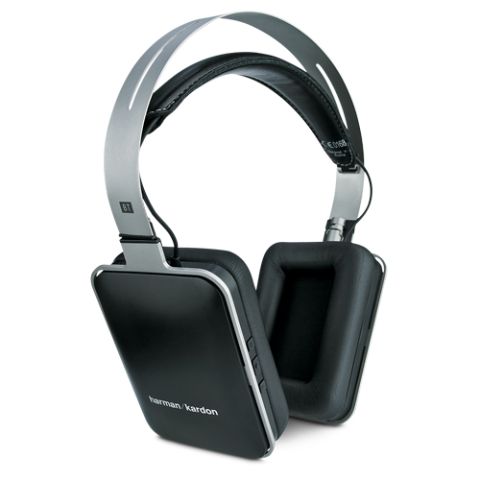 Excellent: owners of aptX-enabled Bluetooth devices should give these a listen

When we tested the Harman Kardon CLs halfway through 2012, we liked them very much. So it stands to reason that we were rather looking forward to the Harman Kardon BTs, the Bluetooth-enabled, over-ear, equivalent.

The design of the BTs is going to be familiar with anyone who’s seen the CLs. There are two headbands: an outer frame made of sandblasted steel, and a more traditional inner band covered in leather.

This is attached to the earcups with a swivelling magnetic hinge. The cans themselves have a closed plastic back, framed in more steel. The earpads match the inner headband’s leather, and are attached by magnets – so replacement is easy.

In terms of looks, these are going to be very subjective. Those rectangular earcups divided opinion on the original CLs, but that was a smaller, on-ear unit. The BTs are full-on over-ears, and those rectangles are much bigger.

While some will applaud the industrial materials and Cyberman-esque shape, it can also look as if you’re wearing two smartphones strapped to your face. Nonetheless, the BTs are well made and very sturdy.

They’re comfortable to wear: despite all that steel, they’re not very heavy. The ear cups are wide and deep, and will comfortably accommodate the biggest of ears. The soft leather earpads are stuffed with memory foam, which conforms to the shape of your head.

The seal around your ears is good enough to provide a respectable amount of isolation. It’s not as good as a dedicated pair of noise-cancelling headphones, so for a flight you might be better off with something like the PSB M4U2 or Bose QuietComfort 15. Crank it up in your home or office, however, and you’re in your own little world.

In terms of fit, the BTs are spot on. They press down hard enough to stay put with a reasonable amount of movement, but they’re never tight. The leather inner headband expands with a generous leeway, and there’s a spare outer frame for larger heads. Having said that, it’s probably wise to avoid running, jumping or violent headbanging while wearing them.

Put them on and you’ll find three buttons behind your left ear. These control playback, volume up and volume down. Anyone who’s used an Apple-friendly in-line remote will be familiar with this set-up: two clicks to fast-forward, three to rewind. The playback button is raised, which makes blind access very easy. Response time could be a little better, but we have no real complaints.

This control scheme is compatible with most devices. For anyone stuck with Android’s one-button system, this convenience is a revelation. We tested the BTs with a few devices (including a 2010 Mac Pro, a 4th-generation iPod Touch, a Samsung Galaxy Note 2) and remote control worked every time.

Battery life depends on how you use your headphones, of course: we managed about 15 hours on medium volume before running out of juice. When that happens, you can get sound via a 1.4m cable, which plugs in under the left ear. The same socket is used for USB charging, but it’s not possible to use the headphones while you charge, which is a pity.

Next to this is a button: hold it to turn power on and off, or hold longer to initiate Bluetooth sync. The button glows slightly to indicate whether it’s on or connected. It’s difficult to see this light when you have your thumb over the button, though.

It would have been less fiddly to have a separate light, especially when there’s already an LED onboard to indicate charging status. Nonetheless, it’s fairly intuitive once you get used to the timing of the button: hold three seconds for power, six seconds for pairing.

Once paired, the connection is very secure. Harman Kardon claims an effective range of 25ft, which seems about right. Within that distance, we were certainly able to stroll around the office in order to make coffee or steal biscuits.

On to sound, then: we connected to a Samsung Galaxy Note 2 to make use of its higher-quality aptX Bluetooth. And we liked what we heard. For starters, there’s an impressive sense of clarity. The performance is well balanced, which gives the BTs a relaxed, neutral feel.

Loading up the xx’s Heart Skipped a Beat, the opening kick-drum packs a satisfying amount of bass weight, while the contrasting hand-claps show off a crisp high-end. When the guitar and singing starts, they demonstrate a smooth midrange.

The timing of the BTs is accurate, keeping up with the track’s fractured rhythm. They’re articulate, too: leading edges are sharp and notes stop and start with precision. It's a polite presentation, however, and we got the sense that they’re holding back when it comes to bite and outright punch.

And, when we switch to a cable connection, our suspicions are confirmed: it’s a more powerful, punchy sound when hard-wired. It’s a good thing that the BTs are capable of more, even if it sort of goes against the point of Bluetooth headphones.

But how do they compare to our 2012 Award winner, the Sennheiser MM 400-X? The current champ is just a little ahead when it comes to delivering that extra bit of detail and attack, which makes them slightly more engaging and entertaining. It doesn’t hurt to have a smaller price tag, either.

Having said that, the BTs’ steel-framed body creates a more premium feel than that of the Sennheisers’ flexible plastic build. And, as they are over-ear headphones, some may find them more comfortable for long listening sessions than the on-ear MM 400-Xs. On top of that, the BTs have a longer battery life.

All in all, there are many reasons to like the Harman Kardon BTs. They can't quite face up to similarly priced wired-only rivals such as the AKG 550, but then again the Bluetooth headphone market is still relatively young. For what they are, the aptX-toting BTs fly the flag for Bluetooth headphones.