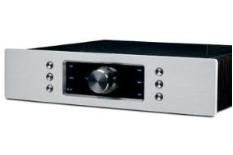 Gamut’s entry-level amp is hugely talented, but is easier to admire than love

Gamut, manufacturer of some very fine amplifiers and speakers, has gone downmarket with the Si100. Yes folks, in Gamut world, paying almost four grand for an amplifier is still considered entry-level. Even so, if this integrated offers a decent chunk of the company's traditionally impressive performance, the price won't be an issue.

Superb build quality
The Si100 looks neat, but there's little visual flair here. Build quality, however, is superb, and the company's core engineering ideals are intact. The most unusual of these is the use of a single output device per channel, rather than the multiple pairs most rivals use.

The idea is that a pair of output devices can never be perfectly matched, so the negative and positive parts of the music signal will be treated differently. Using a single device to do both jobs gets round the problem and, in theory, gives a clearer, more precise sound.

The Si100 is open to criticism when it comes to conveying natural warmth in recordings and delivering subtle dynamics. These shortcomings lessen the impact of, say, Eminem's venomous outpourings on The Way I Am.

Make no mistake the Si100 is a very talented amplifier, and for some people its blend of strengths will be unbeatable for the money. For us, it's an amplifier to respect rather than love.