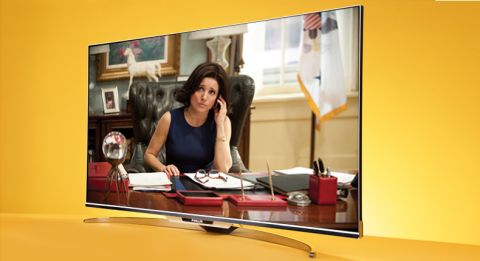 Finlux has a knack for producing great TVs at giveaway prices. You only have to look at its accumulation of four- and five-star reviews on our website to see that.

Its latest 40in model continued the tradition, receiving a full star set earlier this year. Now we’re taking a look at its 47in big brother and, much to our surprise, we’re not so impressed.

Unusually for Finlux TVs, price isn’t as competitive as some rivals – Samsung, Sony and Philips to name a few – and neither is its performance.

It had us fooled at the start; its design indicates that Finlux is upping its game. This is a bezel-banning set (and rightfully so). Only thin black on-screen borders frame the picture.

Connections are plentiful, the highlights being four HDMI and two USB inputs. Among others are Scart, component and composite inputs.

The remote is big and chunky, though a rounded back makes it fairly easy to hold. Unfortunately the layout is poorly designed, making it less pleasant to use than most.

Important, frequently used buttons to load EPG, apps, and shortcuts are small and illogically spread out.

The Finlux set isn’t tepid when it comes to features. Hook it up to the internet wirelessly (via the supplied USB dongle) or, for more reliable results, via a cable connection, and there’s a horde of online features to enjoy.

As well as Twitter and Facebook apps, smart essentials such as BBC iPlayer, YouTube and Netflix are available. No sign yet of 4oD, 5 On Demand or ITV Player, but this could change with a firmware update.

Elsewhere, there’s web browsing and Skype as well as DLNA compatibility to access media stored on a home network.

Invitations to 3D movie nights don’t have to be limited, as a whopping eight pairs of passive glasses come supplied.

And 3D performance is decent. Clear and stable, it’s a perfectly watchable picture that handles motion well during the end pursuit in Hugo, even if it’s not as punchy or detailed as the Samsung UE48H6400 or the Panasonic TX-47AS650B.

It’s the same story with 2D performance – it’s decent for the most part but comes up second-best when compared with the class leaders. Load Pirates Of The Caribbean: At World’s End Blu-ray and it’s a so-so picture, crisp and bright but not bursting with detail.

Out of the box it has a yellowy tinge to its palette, but colours can be easily adjusted – we’d recommend using the THX Optimizer. Even so, the Finlux never quite convinces with skin-tones.

Contrast is excellent, mind. The Freeview HD tuner fares a little better, producing a bright, punchy picture. Watch Escape To The Country and colours are enthusiastic, even if this is not the sharpest HD picture around.

So it’s a middle-of-the-road TV that, despite a decent smart offering, lacks the picture and sound quality of cheaper rivals. It’s a disappointing departure from Finlux’s typically superb value.