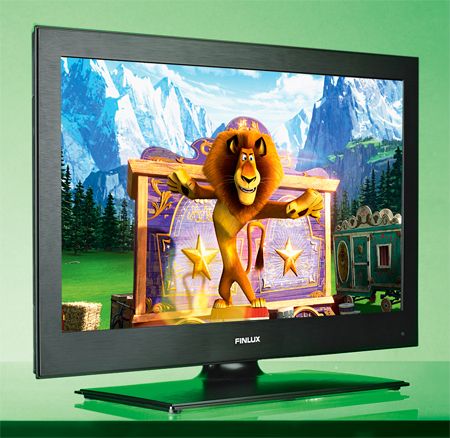 A good option if you want 3D in a smaller room

It’s a smart looker (although that bezel harks back to a bygone flatscreen age), and boasts a healthy two HDMI inputs – so you can hook up a Sky box, say, as well as a Blu-ray player or games console. There are no smart features, though.

Eager to see what a £240 3D set can do, we fire up the 3D version of TT: Closer To The Edge, and are impressed with the results. This is a passive set (it comes with four pairs of glasses – brownie points there, Finlux), which makes sense given the price, and it's a reasonably comfortable thing to watch.

Finlux 26F7030: 3D performance
Any film about motorbike racing – especially in 3D – is going to tax even the most capable television, so we aren’t surprised to see a few shimmers here and there, and a slight diorama effect to deep-perspective scenes at times. But broadly speaking, it’s a nicely immersive performance. It can’t convert 2D to 3D on the fly – so you’ll need 3D source material to start with.

Off with the specs and on with the same movie in 2D and, again, we like what we see. Colours are vivid (if not the most accurate), and while the picture could be more refined, it’s entertaining to watch.

Our main concern is with whites: they aren’t particularly clean, and turning up the brightness robs them of detail without sprucing them up.

Bung on a DVD and there's an inevitable drop in quality, but the Finlux does a decent job of upscaling it to the Full HD panel resolution. It isn't the best contrast on offer, though, so black detail suffers a little. Motion-handling, likewise, could be better – but it isn't a deal-breaker.

Finlux 26F7030: Freeview HDThe Freeview tuner is par for the course at this price. Ropey broadcasts don't do the Finlux any favours, but more mainstream channels look OK. Scrolling news-tickers have a slight judder to them, and colours could be a little more natural, but given the price we can't moan too much.

The interface is easy to get to grips with, but the remote control isn't. It’s massive and has a weird layout that’s difficult to use in the dark.

Finlux 26F7030: Verdict
Overall, though, this is a successful effort for Finlux. The 26F7030 offers good performance, a decently sized screen – and the killer feature of 3D – for a great price. It’ll be ideal for those who have a smaller living room and a reasonably tight budget to stick to.