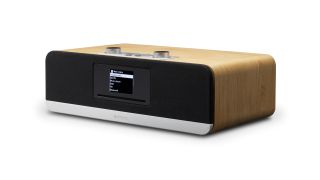 Little could Leslie Bidmead have known the kind of journey his motorbike would take him on when he sold it to pay for a small factory space back in 1932.

From producing just three radios a week in their London shop, he and good friend Harry Roberts grew a company whose pursuit of innovation and uncompromised performance would serve a music-loving public and Royal Households alike – not to mention earning itself a cabinet full of What Hi-Fi? Awards.

From a bloodline including the first portable DAB digital radio and the iconic ‘Revival’ radio – which remains a favourite more than 60 years later – the Roberts Stream 67 is a product born of invention and worthy of its family name.

A wealth of features

A sophisticated Smart Audio system, it packs a CD player, a wealth of physical connections and manifold radio and streaming services into one typically modish wooden cabinet, tuned to Roberts’ usual class-leading standard.

Face on, the Stream 67’s minimal design, with only disc slot showing below a full-colour screen, belies its accommodating of a range of connections. For it is on the reverse, behind the bike shed, where you’ll find USB and aux inputs alongside its headphone out and ethernet terminal.

Via the latter, or this Roberts’ built-in wi-fi, the Stream 67 can tether itself to any NAS device or computer also on your home network, and play any stored music in MP3, WMA, AAC, FLAC and ALAC file types.

That alone would perhaps represent an impressive spread, but Roberts knows a modern one-box system must aim for something higher. Of course, the Stream 67 includes in its arsenal myriad radio services – including DAB and internet radio, with 30 available presets – but it also accommodates streaming over more than its on-board Bluetooth.

Tidal, Spotify Connect, Amazon Prime Music and Deezer are all incorporated, while the Stream 67’s capability of working alongside Alexa and Amazon Echo products means you can control their playback with your voice. Smart Audio, indeed.

Talking to it is only one way to control your Stream 67, however. As ever, Roberts includes a remote, while its smartphone app opens the door to greater functionality, including this Smart Audio system’s use in a multi-room system. There’s a good chance though that you’ll be tempted from your seat to fiddle with the enticingly tactile control dials dominating the roof of the Stream 67’s cabinet.

But all of that is academic if not combined with Roberts’ renowned sonic performance. The Stream 67’s array comprises two mid/treble drivers and two bass woofers with rear-firing ported chambers, emitting a room-filling sound in keeping with the company’s characteristically dynamic, fast and full-bodied presentation.

The Stream 67’s dimensions (45.5cm x 16cm x 28.5cm) make it easy to accommodate, and a five-position equaliser and customisable levels of bass, mid and treble mean you can fine-tune its performance wherever, and on whatever surface you decide to put it.

While rivals have risen and fallen, Roberts has always kept its nose in front thanks to its core philosophy of innovation and class-leading sonic verve. The Stream 67 is only the latest product in more than 80 years that fills both boxes with big, bold ticks.

If you covet a one-box solution to all your audio needs, the Stream 67 Smart Audio system answers your call with a family name you can trust: Roberts.