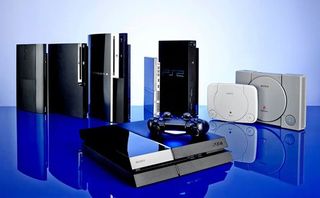 If you remember rushing home to plonk yourself in front of the TV for another go on Air Combat before anyone could give you a telling off, you may want to sit down for a moment. That was 25 years ago.

The first ever Sony PlayStation debuted on 3rd December 1994. It was only available in Japan initially though, finally arriving in the US on 9th September 1995 and in the UK on 29th September that same year.

Oh, and it was held together with screws – so with the aid of a simple screwdriver you could open it up.

Did What Hi-Fi? set about the task of reviewing the new Sony games console as soon as possible? Why of course. And it did not go well.

Barely two months after its release, we awarded the original Playstation just two stars - having focused, perhaps mistakenly, on the PlayStation's mettle as a CD player.

"State-of-the-art games machine... but only so-so with standard audio CDs," is how we summed things up. Hey, we were staying true to our roots.

The birth of Blu-ray

The PlayStation quickly became a serious piece of home cinema kit, however, kick-started by the PlayStation 3 and its integrated Blu-ray player.

At the time of its launch in 2006, there was a fierce battle brewing over the next optical disc format. In one corner was Blu-ray, led by Sony, in the other, HD-DVD, championed by Toshiba.

Sony's decision to give its shiny new PS3 a Blu-ray disc-spinner was crucial in tipping the tide and winning the war for Blu-ray, as consumers and in turn manufacturers quickly saw the way the wind was blowing. Within a year, the writing was on the wall for HD-DVD, and the war was soon won.

Now, of course, you don't even need the discs...

Time and tide wait for no man, although it does seem like we've been waiting a long time for the PS5.

Since our first potential glimpse of the new PlayStation 5 in August, we've seen image leaks and even a mystery cartridge – and finally a "Holiday 2020" PS5 release date. And yes, the PS5 will have a 4K Blu-ray player.

As 2019 draws to a close, we look back fondly at the first PlayStation on its 25th birthday – and look forward to the hotly-anticipated PS5 next year.

The history of Sony PlayStation

PlayStation 5: all the rumours and what to expect