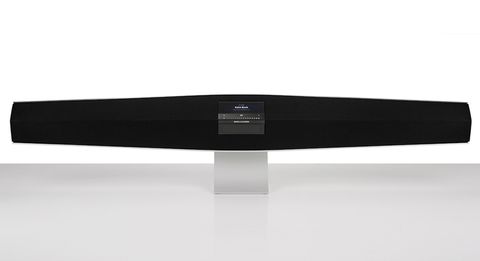 B&O aims too high with its all-in-one system

Over the years, Bang & Olufsen has carved itself a reputation for bold design. From TVs with motorised stands to speakers that look more like Daleks, the Danish company has a proudly unusual approach to popular technology, typically with a weird and luxurious twist. Now it has tackled one of the most popular categories on the AV market: the soundbar.

Or rather, what looks like a soundbar. The label seems inappropriate and crude in the face of the Bang & Olufsen BeoSound 35, whose features list and corresponding price tag are more ambitious than any soundbar we’ve seen.

In truth, this is much more than a soundbar – it is a fancy all-in-one wireless sound system in the vein of the Bowers & Wilkins Zeppelin Wireless or Naim Muso, but aimed at the high end.

How fancy? It begins with extensive connectivity options, which include Apple AirPlay, Bluetooth 4.0 and DLNA for streaming music from a networked device. Compatible formats include MP3, WMA, AAC, ALAC, FLAC, WAV and AIFF, up to 24-bit/192kHz.

It is integrated with web-based services too: Spotify Connect, Deezer, TuneIn (for radio) and Q Music (for the Chinese market). Web connectivity is handled by dual-band wi-fi, plus an ethernet socket for good measure. There are also physical sockets for optical, as well as an RCA input – so you can connect it to your TV and use the 35 as a soundbar if you want to.

There’s also the option of multi-room streaming – the BeoMusic app integrates with the BeoLink multi-room system so you can stream music to several networked B&O products across your home.

It’s a striking look and a guaranteed conversation piece. Sculpting aluminium has long been one of B&O’s strengths, and we are not surprised to see the material has been liberally applied to the BeoSound 35. The thing is almost exclusively aluminium, which B&O says is ideal for acoustic stability and heat dissipation. Just watch out for the sharp corners.

The pentagonal cross section, meanwhile, is supposed to keep the device sounding sweet regardless of high or low positioning – the design works with an adjustable wall mount, although our review sample came with a standard table stand.

Not covered in aluminium are the OLED display and the removable cloth speaker grille. Four drivers lie beneath: two 10cm woofers near the centre and two 19mm tweeters near the ends, angled outwards at 30 degrees to eliminate sweet spots. B&O promises 180-degree sound dispersion.

Under the display is touch-sensitive panel, used for controlling playback, volume and inputs. You can also use B&O’s own lovely BeoRemote One, but sadly this is not included.

Getting started is easy enough. All you need is the BeoSetup app, free on iOS and Android. The BeoSound 35 generates its own wi-fi network. Connect to this and the BeoSound 35 will show up on the app. From here, you can enter your home router’s login details and adjust the BeoSound 35’s settings.

You can play with default volumes and line-in sensitivity, but the most important option is to do with placement. The BeoSound 35 can be positioned free-standing, on walls or in corners – and the app has options to adjust the sound accordingly, so make sure to pick the appropriate one.

We reckon the best sound is with the device away from walls (B&O recommends a clearance of at least 15cm) and set to free-standing mode.

Time to play, and here we run into our first hurdle. The touch-sensitive panel on the device is not very intuitive. The volume slider works as you’d expect, but navigating the menu using left, right and ‘Go’ keys is a chore.

If you’re deep in the list of inputs, you can’t just go back one step and check out the settings – you need to scroll all the way to find the ‘back’ option in order to retreat.

Then there’s the BeoMusic app, which B&O recommends you use, but it was unable to identify our BeoSound 35, even though they were on the same network. We’ve spoken to B&O about this, and it is a known issue.

A software update is promised to fix this, but at the time of writing it was not available.

Without the use of a control app or a remote, and with limited on-board controls, we turn to other options. AirPlay works flawlessly, and Bluetooth has no problem pairing. We also try streaming CD-quality WAV files from a smartphone with DLNA, and that works too. So there are ways to get around software glitches, but at this money we really don’t expect to have to.

Time to play, for real. The first thing we notice is the scale. The BeoSound 35 sounds much bigger than its dimensions (13x100x13 cm, hwd) might suggest. It’s not just size, however – the sound is evenly dispersed, ensuring you are not nailed to one spot on the sofa.

It also gets plenty loud. We’ve been known to make a lot of noise in our test rooms, but we never the felt the need to crank the volume to 100 per cent. You won’t either, unless you live in a warehouse.

We reckon 75 per cent is enough for most living rooms – go higher than that and you begin to lose out on subtlety.

That would be a shame, because subtlety is one of the BeoSound 35’s strengths. The sound is clear and detailed, providing all the fine texture and performance nuances you need for an insightful listen.

Tonally it’s a rich sound. The balance leans towards the low end, which is articulate enough to ensure the delivery never feels tubby. If you’re after a weighty, powerful performance, you’re in for a treat.

Where the BeoSound 35 falters is in its rhythm. Timing could be tighter. We play Nick Cave’s We No Who U R and the drumming does not give the piece the momentum it needs. Organisation could also do with a little work, as instruments struggle to give off a sense of cohesion. We’d also like greater dynamics.

There’s plenty of power under the hood, but play the XX’s Heart Skipped a Beat and the BeoSound 35 doesn’t convey the attack of the intro, which switches from bass kicks to hand claps.

The Bang & Olufsen BeoSound 35 is a mixed bag. We like the aesthetic design, and while we are hugely impressed by the sound’s scale and insight, we wish the performance were more engaging.

Most disappointing of all are the software issues, which often make or break any app-controlled device.

We are accustomed to Bang & Olufsen’s high price tags, which are usually justified by impressive innovations, a lush user experience or simply an impressive performance.

Sadly, the BeoSound 35 offers none of these – at least not enough to distance itself from significantly more affordable rivals.

See all our B&O reviews

See all our all-in-one system reviews