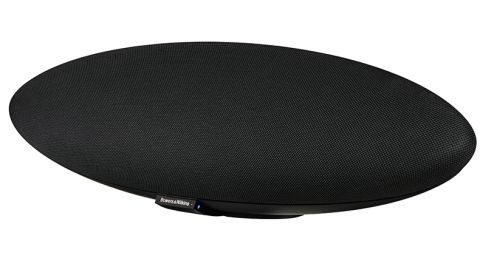 The Zeppelin Wireless remains a fine performer, but it is now up against newer and better-equipped rivals

B&W has cemented its commitment to the wireless speaker market in the last few years with the five-star premium A5 and A7 AirPlay models, and the portable T7 speaker. However, the brand’s Zeppelin line is perhaps its biggest success story.

The original Zeppelin marked the brand’s first foray into the powered one-box speaker market, spawning the equally impressive Zeppelin Mini in 2009, and Zeppelin Air in 2011.

Just when we thought the range had succumbed to the brand’s more conventional-looking entries, along comes the Zeppelin Wireless. The iconic design returns, with the Wireless simply gaining a couple of centimetres here and there.

But as speaker design has become more outlandish, with some resembling koalas, or even beach balls, the Zeppelin doesn’t seem quite so offbeat anymore. Instead its elegant, stylish look proves timeless.

Behind the elliptical front panel are five new drivers: two 25mm metal dome tweeters, as found in the company’s CM Series speakers, and a pair of midrange drivers which, featuring FST technology borrowed from the flagship Diamond 800 Series, use a foam surround instead of a conventional one to improve damping. They also feature anti-resonance dust caps for a cleaner, smoother response.

Taking centre stage on the baffle (now double the thickness to reduce vibrations) is a single 15cm woofer – the same size as the one found on the flagship A7.

There are a few upgraded components, but the power amplification stage is largely the same, each driver powered by a Class-D amplifier. B&W claims that the digital signal processing is now twice as powerful too.

That’s pretty tech-heavy stuff, but if an established stereo speaker company such as B&W wants to repackage some of its flagship technology and engineering into a smaller, more modest offering, who are we to argue?

Design-wise, the Wireless is the most seamless-looking Zeppelin. A small brand badge, which protrudes from the shapely chassis, doubles as a neatly discreet control touch panel.

Though the front-facing Apple dock has been ditched, direct connection to a smartphone or tablet can still be made via its 3.5mm input. However, the Zeppelin’s focus is very much on wireless connectivity – through AirPlay, aptX Bluetooth or Spotify Connect.

Touch the right side for two seconds to initiate Bluetooth pairing, tap the other side to switch to the 3.5mm input. It’s wonderfully simple. Set-up is facilitated by the updated Bowers & Wilkins control app, which gets you up and running in no time. Unfortunately, there is no Android version, which feels like an oversight.

The only other things to get acquainted with are three buttons on the top for volume and play/pause; ethernet, power and auxiliary sockets around the rear; and a service-only type-B USB slot.

The Zeppelin plays and upscales to 24-bit/192kHz, so a 96kHz file of Muse’s Supremacy over Bluetooth seems like a good place to start.

The B&W’s wide girth helps create an expansive spread of sound that fills our large test room. Close your eyes and it’s easy to imagine that the song’s epic orchestration is blaring from two speakers. It doesn’t just throw out a big sound, but also a precise and well-imaged one that stays composed no matter what the volume.

We love the tight and well-defined bass, with the Muse track’s walloping drums lathered with punch and power. As the onslaught of distorted guitars comes in, there's heft behind each strum. But there's detail too, the dramatic raptures of violins pulling through with clarity and texture in spades.

Convincingly organised and with a precise ear for rhythms, the B&W stays coherent and coordinated even in the dense orchestral climax. It’s pricier rivals show it up in absolute timing, but it’s agile enough for its level.

Take the intensity down to a simple vocal and guitar accompaniment with Eva Cassidy’s Fields Of Gold and you can really appreciate her soaring vocals and subtle trail-offs, with a strong sense of tactility to the acoustic strings.

Move onto Eminem’s rap vocal in Bad Guy and it almost sounds like an assault, the venom in his delivery and the dynamics of his quirky structure laid bare. There’s no shortage of clarity and insight for the price, but we would like a touch more solidity through the midrange to give the Zeppelin more authority.

When compared with the £595 Naim Mu-so Qb, a hint of fragility and leanness to the Zeppelin is uncovered, something its competitors are able to avoid.

There’s also a slight dip in clarity and subtlety when playing songs over AirPlay. Compared to Bluetooth and Spotify Connect, it makes music feel a little closed-in, yet even a low-res Spotify stream of Pink Floyd’s Another Brick in the Wall Pt 1 sounds surprisingly informative.

The Zeppelin Wireless keeps the range’s legacy alive, combining a highly accomplished sound with greater functionality and a seamless design.

Pricier speakers might have more to offer when it comes to timing, drive and overall authority, but at £500, the Zeppelin Wireless remains a fine performer.