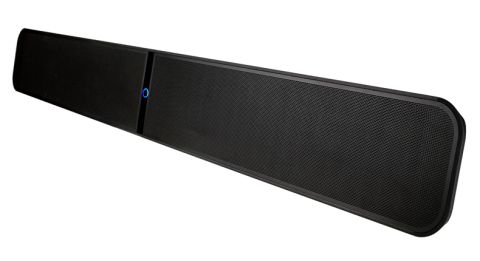 It’s more streaming system than simple soundbar, but this pricey, features-filled Bluesound is worth considering for its powerful sound

To call the Bluesound Pulse Soundbar a soundbar would be grossly unfair. Yes, it’s shaped like a soundbar, yes it’s designed to be placed under a TV and its main function is to boost the TV's sound quality.

But with wi-fi, ethernet and aptX Bluetooth all on board, it does so much more.

Described as an 'all-in-one wireless streaming audio system', once it's connected to a network, it can stream just about any music file from anywhere to the Pulse Soundbar.

It isn’t just Bluesound’s first soundbar – it’s also the first soundbar to support hi-res playback and MQA files. Add in a mostly majestic sound, and we can understand why it costs an eye-watering £1000.

If we had to quantify the value of the Bluesound Soundbar in sheer heft, it’s worth the high price tag. At 7kg, the Soundbar has the kind of solid build quality you could thwack an armed robber with.

The all-black finish of the aluminium chassis looks sleek and the curved edges soften the look. But there’s no escaping the fact you’re going to have to clear some space in your living room to house the Soundbar.

If you want to place the bar directly in front of the TV on the rack, there are two different-sized sets of feet to prop it up.

They’re easy to slot into the holes in the back, and the bar does stay put, though wish there was a more secure locking mechanism for the feet. However, the bar’s considerable height (14cm) means wall-mounting might be a better option.

You won’t see any buttons or displays on the bar, which leaves it looking relatively discreet. There’s only a circle of LEDs in the middle that glows subtly.

A neat trick is that you can flip the bar 180 degrees and a built-in sensor will adjust the left and right channels accordingly.

But the biggest appeal of the Pulse Soundbar is its wireless streaming capabilities. From hi-res 24-bit/192kHz files in just about all formats to the fledgling MQA, you’d normally see such credentials only in pricey hi-fi streamers.

Essential to using the Bluesound Pulse Soundbar is the BluOS Controller app.

Available for Apple and Android devices, the free app will be familiar to anyone with an existing Bluesound system. This dense and complex app might take a while to get used to, but it’s full of options to play your music and movies through the Soundbar.

The fact you don’t get a proper remote with the soundbar will divide opinion, as it’s easier to press a button when adjusting volume rather than going into the app.

However, the soundbar has an IR sensor with learning function so you can use your TV’s remote to do those functions..

Connect the Pulse Soundbar to your home network (using a stable wired ethernet connection), open the BluOS app and it should find the Soundbar.

You’ll be able to start controlling every aspect of the soundbar – volume, tone controls, listening modes, input – as well as streaming from various connected sources..

The main music streaming services – Spotify Connect, Tidal, Deezer, Qobuz, Napster and TuneIn radio – are available in the app’s menu, or, for a more straightforward approach, aptX Bluetooth is on board for streaming from all devices.

The physical connections are hidden away at the back of the bar. You’ll find an optical input and a pair of RCA inputs for plugging in your TV, and a USB port for playing content stored on sticks and drives.

You might wonder why you’re not getting any HDMI inputs at this price. Bluesound claims it wants to keep things simple. Since the optical input (and streaming over the network) supports 24-bit/192kHz content and is easily compatible with all TVs, it hasn’t felt the need to include HDMI.

Also, the Bluesound is a two-channel bar: it’s capable of decoding Dolby soundtracks, but will downmix everything to stereo.

A forthcoming update means you’ll be able to insert other Bluesound wireless speakers (such as the Pulse, Mini or Flex) and use them as rear speakers for surround sound.

Since it’s part of the Pulse family, we imagine the Soundbar will be inducted into the multi-room ecosystem soon enough.

If you’re expecting a huge, wide sound from the large Bluesound soundbar, then that’s exactly what you’ll get. Play the Avengers: Age of Ultron Blu-ray, and the soundfield that emerges from the Pulse Soundbar is large-scale, spacious and extends far beyond its physical dimensions.

With so much superhero-enhanced action going on in the explosive Avengers film, Bluesound’s muscle and power (a claimed 120W across six drivers and two passive radiators) is much needed.

There’s plenty of weight underpinning the ample detail, and sound effects move around convincingly. It’s not quite the wrap-around 5.1 surround sound you get from Yamaha’s YSP soundbars, but there’s a good amount of movement given to flying Iron Man suits, the zing of Captain America’s shield and Thor’s hammer.

The soundbar’s grand scale will draw you into the action, and the full-bodied approach means it’s comfortable to listen to. There isn’t a spiky edge in sight.

The Hulk’s roars are huge, loud and muscular, and each stomp lands with a decent thump. But the bottom edge is a bit soft, where we need a more impactful, satisfying punch.

We could do with more suspense when the evil robot attacks the Avengers for the first time. Our Award-winning Dali Kubik One builds up the tension to a nail-biting level with a touch more subtlety. The Bluesound gets the excitement across, but needs a dose of rhythmic accuracy, clarity and more expressive dynamics too.

The thunk of metal hitting metal in any action scene has a good deal of punch through the Bluesound, but we want more precision and control.

The edges of notes are rounded off enough to prevent the Bluesound from being as attacking and meticulously precise and subtle as we’d expect at this high-end price. The nuances and subtleties of each voice are laid bare, but the Bluesound doesn’t sound quite as pristine or crisp in comparison with the Dali.

Stream The Dead Weather’s 60 Feet Tall, and the rolling drums in the intro could be handled with more definite control and tautness. And while that lively bassline in Fleetwood Mac’s Dreams has a nice bounce, we want it tightened up even more, so the rhythm is spot-on.

It’s because the Bluesound Pulse Soundbar is priced at £1000 that we’re scrutinising it so ferociously against our class-leader.

The Dali Kubik One soundbar may not match the muscle or scale of the Bluesound, but Dali’s stunning clarity and handling of rhythm and detail make it the best soundbar your money can buy.

The Bluesound, however, is impressive for its scale and richness. And that features list is hard to argue with.

If you’re looking for a grand soundbar that has the perks of the best streaming features available, this Bluesound Pulse Soundbar will certainly meet your needs as a main entertainment hub.