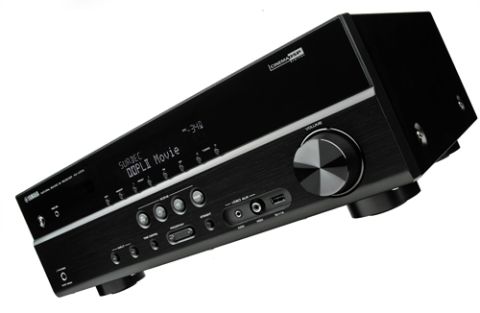 Best home cinema amplifier up to £350, Awards 2013. Energetic and punchy surround sound performance that will thrill and engage at this excellent price

The Yamaha RX-V375 is a fantastic proposition for its price. Delivering a thrilling 5.1 surround sound for £250, it’s the perfect first step towards the delights of home cinema sound.

And at its core, it’s that signature Yamaha sound: muscular and weighty with precise surround sound steering across all five channels.

The RX-V375 focuses on delivering the most exciting sound that it can muster. It thunders through the Blu-ray of Marvel’s Avengers Assemble and delivers each crash, explosion and punch with plenty of impact and bite.

Yamaha is known for its excellent surround steering abilities, and the RX-V375 doesn’t disappoint. Flying aliens, Iron Man and whizzing arrows all swoop across the room with relentless precision and confidence.

It might not be capable of the biggest soundfield – you’ll have to look to the £2000 Yamaha RX-A3030 for maximum trouser-flappage – but what it does do is deliver the most detailed and dynamic performance we’ve heard at this price.

It’s particularly skilled with voices. Clear and expressive, the RX-V375 does a great job in relaying the humour and emotion in Avengers Assemble amid all the fast-paced action.

AV receivers at this price can tend to sound thin and hard-edged when pushed too hard, but the RX-V375 rallies against this, delivering a satisfyingly solid sound that packs in plenty of detail to keep you fully engaged.

Of course, it isn’t as hugely powerful and muscular as the bigger and pricier amps in Yamaha’s line-up, but that works in its favour.

A leaner sound makes the RX-V375 sound lively and light-footed compared with the heftier presentation of the Yamaha RX-V675.

There are no networking capabilities on the RX-V375. It’s not surprising that Yamaha has sacrificed certain features to keep the price down, though – and this amp keeps it simple by focusing purely on surround sound.

As a result, there’s no DLNA, Bluetooth, AirPlay or internet radio. We’re not too fussed about the lack of wireless music streaming, as the Yamaha’s movie performance far outshines its music talents.

You can still play digital music by plugging in your iPod or iPhone into the front panel USB port (which also charges the device).

But where movie soundtracks were handled with admirable talent and control, stereo music doesn’t quite hang together as well.

The RX-V375 can’t quite convey the rhythmic cohesion crucial to delivering stereo music, despite retaining its solid and dynamic characteristics.

We think it’s best to leave stereo sound to a dedicated stereo amplifier, if possible.

The RX-V375 supports playback of Full HD and 3D content, upscaling to 1080p, and 4K pass-through across its four HDMI inputs.

The connectivity doesn’t end there. There are two component, two optical and two digital coaxial inputs, with four composite and analogue audio inputs also available at the rear panel of the AV amplifier.

There’s no internet radio, but you can still tap into the airwaves with built-in FM and AM radio tuners.

If you want to get into home cinema, we highly recommend starting your system with this capable Yamaha RX-V375 receiver.

It delivers a blistering performance, and you’ll be fully engaged with its 5.1-channel surround sound talents. And at just £250, it’s a fantastic bargain too.