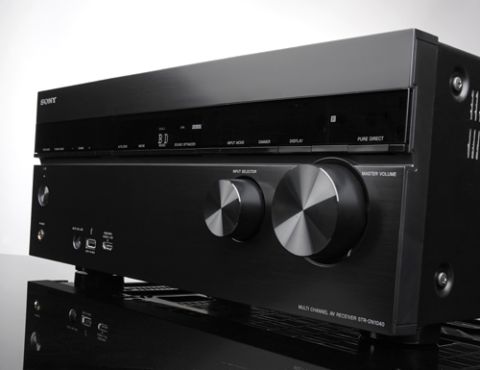 Product of the Year, Awards 2013. Depth of detail, exciting and ample connectivity – this is a superstar in the making

The Sony STR-DN1040 is the successor to the five-star-rated STR-DN1030, which just missed out on an Award last year in light of the excellent performance-per-pound exhibited by the Yamaha RX-V673.

The £500 mark is the sweet spot for AV receivers, and the Sony STR-DN1040 has come fighting back in the hope of beating its peers from Denon, Onkyo, Pioneer and Yamaha.

Of the two 2013 receivers we’ve already tested, it’s the Denon AVR-X2000 that Sony has to beat. While the Onkyo TX-NR626’s lack of subtle detail prevented it from gaining the full five stars, the Denon impressed us with a punchy and upbeat performance – a welcome return to form for the brand.

Spin the Blu-ray of Mission: Impossible – Ghost Protocol, and the Sony receiver sears through the 7.1-channel Dolby TrueHD soundtrack effortlessly, steering effects with precision and delivering a sound that’s strong, punchy, and full of subtle detail.

Unlike some amps, which can sound brittle at higher volumes, the STR-DN1040 rewards turning the dial clockwise. The soundfield opens up, dynamics are richer, and sound effects are easy to place around the room.

Unlike the STR-DN1030, the 1040 shows little tendency to get too bright when the volume increases. The top end has the right amount of zing and excitement, while bass remains taut and agile. It’s a strong sound, with gunshots, explosions, and punches hitting with satisfactory impact.

But it’s not all power and special effects: this Sony AV receiver also sounds clear and refined, capable of revealing the inflections and emotions in voices.

On that note, how does it sound in stereo? Multichannel AV receivers aren’t the obvious choice when it comes to reproducing two-channel music, but it’s clear that Sony has been taking note of the criticism – the STR-DN1040 does more than a decent job when streaming Adele’s Rolling in the Deep from a NAS drive via DLNA.

Her powerhouse vocals sound strong and detailed, and hiking the volume gives an even punchier and weightier sound – drum beats hit hard and rhythms sound precise and agile, with the amp rarely lagging behind the beat.

It might not be as delicately handled as a dedicated stereo amplifier, but there’s enough energy and detail to make playing stored tunes over a network worthwhile.

Sticking with music, we play the Blu-ray of The Rolling Stones’ Shine A Light concert documentary. Champagne and Reefer has a great atmosphere, and the Sony’s dynamic reach, detail definition and sure-footed timing come to the fore here.

To get the Sony '1040 sounding its best, setting it up to suit the rest of your system and your room’s acoustics is crucial. Sony’s new Advanced DCAC (Digital Cinema Auto Calibration) with Auto Phase Matching (APM) calibration system might be a mouthful to say, but it’s a quick and easy process to go through.

It also features one of the more enjoyable test tones – the Sony’s playful series of notes is a welcome alternative to the standard beeps and hisses used by the Audyssesy (Denon and Onkyo) or YPAO (Yamaha) calibration systems.

Once the auto-calibration is done, you can delve back into the menus to manually tweak your speakers’ distance, level and size, but we found the calculations to be pretty accurate. You’ll be urged to select a post-calibration add-on (EQ settings such as Full Flat, Front Reference, and Engineer are available), but we chose to turn all the additional processing off.

The STR-DN1040 has had a makeover from the 1030, and we think it looks good. The receiver itself is solidly built and substantially weighty – but the front fascia is clear of any unnecessary buttons, sporting only essential controls and a simplified display.

Also gone is the increasingly complicated Xross Media Bar menu style, replaced with a neater, more modern-looking interface. The main menus are separated into four simple rectangular bars: Watch, Listen, Sound Effects and Settings. The new interface is laid out neatly with elegant graphics, and icons for video and music sources – it’s one of the nicest systems we’ve come across.

It’s easy to navigate your way around the full screen menu using the standard remote control, although not being able to see the picture when adjusting the A/V sync is frustrating.

One feature that’s worth a toggle is the Pure Direct mode if you’re using analogue sources only – it turns off the receiver’s digital display and internal digital circuits for a cleaner analogue sound.

Sony offers a number of audio-processing modes for movies and music, including Dolby and DTS modes for sending stereo sources to multichannel outputs, as well as adding front-height speakers for a nine-channel system.

Sony’s High Definition Digital Cinema Sound (HD-DCS) technology also features concert-hall effects – it’s worth trying these modes, although we prefer not to layer any additional processing on top of the native soundtrack of films.

As is becoming the trend, 4K ultra HD upscaling is top of the Sony’s spec-list, along with native 3D pass-through and upscaling standard-definition video to 1080p. Along with the standard complement of digital and analogue inputs, there are eight HDMI inputs for all your high-definition sources, including a front panel MHL (Mobile High-definition Link) input to connect directly with Android smartphones.

You can play high-resolution audio files up to 24-bit/192kHz stored on a USB drive too, and also play music stored on any Apple device by simply plugging them into the front-panel USB port. For Apple playback, press the ‘iPhoneCtrl’ button to select songs and playback options on your iPhone/iPod – but unfortunately the sound is considerably thinner, with a strong and rather bright top end overshadowing the taut and punchy basslines.

You aren’t limited to just wired connections: the DN1040 features built-in wi-fi and AirPlay for wireless streaming over the internet and from Apple devices.

You can wirelessly connect the STR-DN1040 to your network to play files stored on NAS drives (WAV, MP3, FLAC, WMA and AAC formats are all supported), and also stream music from internet streaming services such as vTuner radio and the Sony Entertainment Network (SEN). There’s no Spotify, though.

You’ll need an account (and pay a monthly subscription) to use SEN, but the free vTuner service has a good selection of popular radio stations from BBC and Absolute Radio. Wireless streaming was fine in our testing room, but we generally prefer to use wired ethernet for a more stable connection.

While it doesn’t share the Onkyo TX-NR626’s Bluetooth capabilities, the Sony’s AirPlay compatibility means you can stream from any number of Apple iPods, iPhones and iPads.

And last but not least, the tuner lets you listen to traditional AM and FM stations – you can browse through stations using the remote or the flat buttons on the front panel.

There are two free control apps (available on Android and iOS) that you can use with the Sony STR-DN1040.

Use Sony’s TV SideView app to control various features on the DN1040, from playback options, navigating through the menus and switching inputs and volume from one neatly arranged screen.

Sony's Network Audio Remote app is dedicated to music playback (although you can use it to control video volume, too).

It lets you browse through songs available over various connected sources (including NAS drives and the internet), view album artwork, skip tracks, change volume, and even make playlists.

The Party Streaming feature works with compatible Sony Network Audio products, so you can play music simultaneously over multiple speakers for a multiroom experience. It’s a simple interface, and handy if you want to access all the music connected to the receiver from different sources

The Sony STR-DN1040 ticks all the right boxes when it comes to network connectivity, and it’s a dab hand at playing stereo music too.

But when it comes to multichannel soundtracks, this AV receiver is one of the best we’ve heard at this price thanks to its engaging detail, soaring dynamics and punchy effects.

The STR-DN1040 is well worth an audition if you’re looking to drive your home cinema system, and sure to be in contention for top honours in 2013.

See all our AV receiver reviews