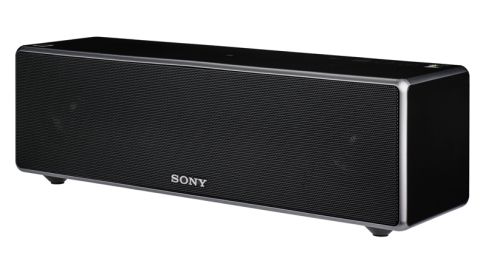 This speaker has a sleek design and is very versatile, but doesn’t have the sound quality needed to make the most of it

The Sony SRS-ZR7 is a three-star speaker. Now, if you’re the sort of person who has to have the best, you can stop reading. This wireless speaker isn’t going to make it past your front door.

But if you’re interested in the details of a product and want to map the peaks and troughs of this speaker like a cartographer might explore terra nova, then read on.

There’s quite a lot that this speaker does well, its only failing is that its sound isn’t up to the best at its price.

Aesthetically, the SRS-ZR7 is a sleek speaker.

The minimalist design will fit most households, apart from possibly a log cabin or Elizabethan manor house, and at 1.8kg it’s pretty light too.

It might look portable, but the SRS-ZR7 isn’t battery powered and instead has to be permanently connected via its AC power adapter. Your placement is limited to how far the cable can stretch from your mains socket.

But once in place, there are few things you won’t be able to connect to it. There are two USB ports, an ethernet connector and a 3.5mm jack input, all of which can be connected simultaneously.

Tap the ‘Function’ button on top of the speaker to switch between them.

If you prefer to stay wireless, you aren’t left wanting for ways to stream music. The speaker is compatible with Spotify, Google Cast, and Sony’s own SongPal music app.

A surprising extra feature of this wireless speaker is that there’s also an HDMI input, so you can plug it into your television and use it as a soundbar.

It’s a welcome addition, and while most soundbars have a longer, thinner design, this brick-shaped speaker has a similar functionality.

Sony has actually gone one step further, suggesting you connect multiple SRS-ZR7s together for a surround-sound set-up, which is handy if you don’t have the space for a classic home cinema system.

The speaker has Sony’s LDAC Bluetooth audio coding built in, that claims to transmit three times as much data than ordinary Bluetooth.

So, it’s a shame that for all its impressive functionality, that the SRS-ZR7 sounds pretty ordinary. On the positive side, it does a good job of keeping songs organised.

The multitude of instruments in Mozart’s Don Giovanni sound distinct within the harmonies, and you’ll be able to follow the progression of each.

The speaker also has a nice handling on the treble and midrange. The sparsely produced Crystalised by The xx can be a challenge for speakers, especially the high-pitched vocals, but the Sony conveys them without any harshness.

The song’s eerie tones are also given the space to reach out, on a large sound stage for such a small speaker. There’s a satisfying amount of movement in the presentation for something that is, by design, compact.

Drums bounce around from left to right and, while it’s not quite as precise as with a surround-sound system, you can still pinpoint the origin of each particular instrument.

However, the SRS-ZR7 falls down at a few hurdles compared with the Audio Pro Addon T3. It doesn’t have as much detail as we would like, noticeable on songs like ELO’s Mr. Blue Sky.

The radio tuning that begins the track isn’t clear and the electronic reverberations in Jeff Lynne’s voice are almost absent.

The dynamics need a boost, too. Leonard Cohen’s You Want It Darker sounds comparatively restrained compared to other speakers at this price.

The difference between the quiet, breathy backing vocals and his rich lyrics isn’t large enough to encapsulate the gravity of the song.

At lower frequencies, the Sony only conveys the upper range of the bass, which is understandable because of its relatively compact size.

This means that songs heavy on deep drums, such as heavy rap like Kanye West’s Black Skinhead, don’t have enough punch to make them enjoyable.

The Sony SRS-Z7R speaker is organised and spacious, but doesn’t have the dynamism or bass punch that we’ve heard from other wireless speakers.

However, we wouldn’t be surprised if this is a design that Sony returns to in the future – a Bluetooth speaker that can double as a wired soundbar or a wireless sound system is an interesting idea.

Sony just needs to make it walk the walk, as well as talk the talk.