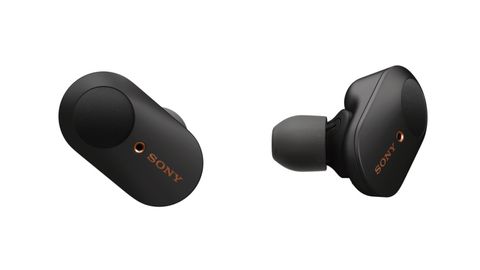 The Sony Headphones Connect app has been around for a while but it gives a little more control over some of the functions of the WF-1000XM3s. You can see the battery level of each earpiece and the case, alter the built-in equalizer, enable Amazon Alexa or Google Assistant support and flip the functions of the touch controls – useful for any left-handers who feel more comfortable this way.

We’d recommend making sure the Sound Quality Mode is set to prioritise sound quality instead of Bluetooth connection. We’d also experiment with the DSEE HX sound processor, which can be switched on or off. We prefer to have the extra sparkle music seems to have with it switched on, although we did find that battery life takes an extra hit with this turned on.

It’s rare to find a pair of headphones that implement touch controls flawlessly, but Sony has done a decent job. The target for your finger on each earpiece is quite small, and we find that holding the earpiece with forefinger and thumb and tapping with your index finger is a good technique.

Out of the box, the left control pad is for turning noise cancelling on or off (it’s on as default) and engaging the Ambient Sound mode, which allows in a bit more outside noise. Tap and hold to engage the Quick Attention feature, allowing you to hold a conversation without having to pause your music or take them out.

In November 2019, Sony released a firmware update that now allows you to control volume through the touchpads. You just need to go into the Headphones Connect app to enable this feature and assign the function to an earbud.

Part of the credit has to go the noise cancelling on the WF-1000XM3s. It’s clearly a step up and even without music playing you can hear the headphones cancelling out more background noise. They can’t match a proper pair of over-ear noise-cancelling headphones but it’s difficult not to be impressed with what Sony has managed to do with such small earbuds.

The touch controls take a bit of getting used to, and it would be nice to support aptX HD Bluetooth, but apart from that, you simply can't get a more musical and engaging performance from a pair of true wireless earbuds. We’re well and truly smitten.