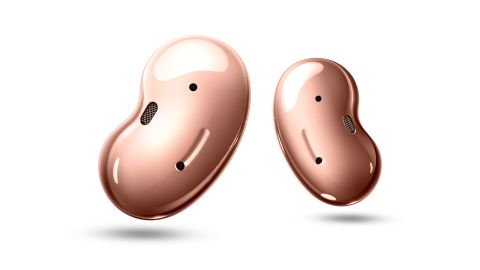 Samsung’s ambitious wireless earbuds boast a neat design and tick a lot of boxes, but the sound quality and software need to be better

If we asked you to imagine a pair of wireless earbuds, you’d probably have a pretty good idea of how they should look and how they’re supposed to fit.

Something small where the driver housing protrudes from your ears but with buds and silicone tips that bury themselves in your ear canal like a tiny burrowing mammal. They might even have a stem to help secure the headphones in place. Right?

Well, the Samsung Galaxy Buds Live aren’t your average pair of in-ear headphones. Yes, they’re a pair of wireless earbuds, but the Korean giant has gone back to the drawing board for their new Galaxy Buds. The shape and fit are unlike anything we’ve ever seen from the brand or anyone else for that matter. Given the quality of rivals lurking around this price point, we just hope the audio side of things is up to scratch.

If you know your beans, you’ll notice that the Galaxy Buds Live do a very good job of resembling a shiny Phaseolus vulgaris, more commonly known as a kidney bean.

Hold a pair in your hands and that glossy exterior feels smooth to the touch, while they’re also extremely lightweight. The shape of the buds means they’re supposed to nestle in your ear with the speaker near the bottom tip of each earbud firing into the opening of your canal. There’s a small video demo in the companion app for the headphones that shows you how they should look in place.

What they aren’t designed to do is burrow right inside your ear canal. Samsung has deliberately designed them this way to appeal to people who don’t want that invasive sensation. Each earbud is vented on the inside and includes a bass port on the outside to allow for a more spacious feeling and to remove some of that stuffy, almost claustrophobic sensation that traditional earbuds can generate.

So, they won’t be sitting very far into your ear canal; but neither do you want them too far out, otherwise you won’t get sufficient bass from the headphones.

The buds come with two different sizes of wing tip (small and large) to help you secure the top section of each bud. Once in place, they feel light, comfortable and secure even if that shiny surface can be a bit slippery in your fingers at times.

Noise-cancelling appears in a pair of Galaxy Buds for the first time. Samsung claims its ANC (Active Noise Cancelling) technology can reduce background noise under 700Hz (e.g. trains and buses) by up to 97 per cent, while still enabling some outside sounds such as voices and announcements to get through. More on this later.

The buds support Bluetooth 5.0 and use ‘Samsung Scalable Codec’, a technology that can change the bitrate of the music being played, depending on the strength of your Bluetooth signal. It only works with Samsung devices (Android 7 and above) and you can’t turn it off, but we don’t hear any major jumping around of quality during testing with a Samsung Galaxy S20 Ultra.

What we do experience is an audio dropout or two while using the earbuds in the local park. It happens with a range of streaming services including Spotify, Tidal and Amazon Music HD. Strangely, we don’t experience such dropouts when listening at home, where you would think there might be more chance of wireless interference.

As is the norm for true wireless earbuds, the Galaxy Buds Live come with their own carry case. It’s petite and pocketable, much smaller than the box you get for the Sony WF-1000XM3s and a little chunkier than the box you get with a pair of Apple AirPods 2. It’s also finished in a colour that matches the earbuds, without the reflective finish.

The earbuds drop into recesses and are held in place magnetically. An LED indicator lights up to let you know when they’re charging (red) and are fully charged (green).

The case also gives you a rather vague indication of the amount of battery it has left by glowing red (less than 30 per cent), yellow (30-60 per cent) or green (more than 60 per cent). For a more accurate figure, you can take a look at the Samsung Galaxy Wearable app for Android or Samsung Galaxy Buds app for iOS.

And it’s the charging case that seems to throw up another bug during testing. A few times we place the Galaxy Buds live in the case to charge and come back to them a couple of hours later only to discover they haven’t charged at all. Hopefully this is one gremlin that can be ironed out quickly.

The total battery life for the Galaxy Buds Live depends, of course, on the settings and preferences used. You’ll get six hours of life at full charge with ANC on and Bixby voice control off, with a further 15 hours provided by the carry case. Having Bixby on drops the battery life to 5.5 hours and the case to 20 hours. Alternatively, battery life can be extended to eight hours and 29 hours if you switch both noise-cancelling and Bixby off. A five-minute quick charge is enough to get you around an hour’s playback.

The companion app allows a number of things – you can see the individual battery life of each earbud plus the life left in the case. You can also switch noise-cancelling on or off, use the ‘find my earbuds’ feature, and tweak the functionality of the touch controls. You’ve also got access to an equaliser with six different preset sound modes: Normal, Soft, Bass Boost, Dynamic, Clear and Treble Boost. We tend to stay in Normal during testing. The Labs section of the app allows you to try out the gaming mode, which promises low latency when playing mobile games.

The default touch controls are a single tap to play/pause, double-tap to skip forward a track or take/end a call, and triple-tap to skip back. Touching and holding your finger on the surface of one of the buds switches noise-cancelling on and off. You can even turn the controls off entirely if you tend to touch them by accident. And it’s here we come across another bug during testing. We have the controls turned off but when we turn them back on in the app they won’t respond to any taps. We leave the headphones for half an hour or so, come back to them and they work fine once again.

If you own a number of Samsung Galaxy products, a pair of Buds Live opens up a few extra features including quick pairing and switching between devices including tablets and TVs. There is also the ability to share songs from one Galaxy device with another listener through another pair of Galaxy Buds headphones.

If you're also using an Android phone you can pause music by removing the earbuds and resume by slotting them back in place.

Samsung has paid particular attention to call quality with the Galaxy Buds Live. They employ a trio of mics in each earbud. Two outer mics that pick up your voice and reduce background noise work in concert with an interior mic, using beamforming to focus the signal on where your voice is coming from.

They work in tandem with Samsung’s Voice Pickup Unit, which uses accelerometer tech to sense the movement of your jaw, and bone conduction vibrations that are converted into voice signals. This tech is claimed to make it easier for you to be heard and also to help reduce outside noise.

During calls, our voices are easy to hear and understand, and there is no real issue in terms of clarity. We also find the earbuds are affected less by wind noise than some other rival designs. Whether the bone-conduction technology is making a big difference is difficult to say.

Because the Galaxy Buds Live let more ambient noise in than their closest rivals, their noise-cancelling isn’t as obvious compared with a pair of Sony WF-1000MX3s or Apple AirPods Pro. In fact, toggle it on and off in the app during normal listening conditions and you might be hard pressed to tell a difference - the effect is very subtle.

They lack the almost air-tight seal of traditional in-ear headphones, of course, so you might be worried about the amount of bass the Galaxy Buds Live can deliver; you needn’t be. There’s a seriously impressive amount of bass on offer, yet you still get a good sense of openness and spaciousness that the design of some rival earbuds just doesn’t really allow for.

Those hefty lows don’t overpower the sound, and they contribute to nicely balanced and controlled delivery of music. That richness mixed with crisp highs helps contribute to a full-bodied and pleasant-sounding sonic package.

We kick things off with Starboy by The Weeknd. It’s a pretty simple mix for the buds to follow and they do a good job punching out that weighty, pulsating bassline without suffocating his vocal. There’s a good level of openness around the different elements and the track is layered with plenty of detail.

The Galaxy Buds Live are an easy-going listen, which means they don’t offend over long listening sessions and do a good job of taking the harsh edges off rougher recordings. The downside is that they aren’t particularly exciting or interesting to listen to. They also struggle to get into the groove of a track.

They do okay with simple rhythms, but struggle to keep more complex arrangements organised. Tracks such as Alt-J’s Breezeblocks sound somewhat disjointed and confused as the Galaxy Bud Live struggle to knit the different strands of the track together.

The Galaxy Buds Live also don’t communicate shifts in dynamics as clearly as the best wireless earbuds. Clint Mansell’s Lux Aeterna is a classical piece that oozes drama from every note, with low-level dynamics that set the foundations for an emotional climax. The Galaxy Buds Live can’t quite capture this; you should feel a swell of emotion as the sound of the strings themselves starts to swell and the track rises to its conclusion, but the headphones don’t have the talent to pull off those dynamic lunges.

It’s a brave move tinkering with a tried and tested headphone design, and we’re pretty impressed by the execution of the Galaxy Buds Live. They’re extremely lightweight and very comfortable during long listening sessions, and they kick up a surprising amount of bass given their design. It’s an impressive achievement for the money.

Having said that, we did experience a few software bugs in the system; hopefully these can be ironed out sooner rather than later. We’ll be keeping an eye out for future firmware updates.

Our main issue with the Samsung Galaxy Buds Live, though, is simply down to sound quality. Yes, they produce a hefty and full-bodied sound, but it’s a sound that lacks dynamism and excitement. Their lack of enthusiasm, combined with a tendency to trip over themselves rhythmically, means they struggle to hold the listener’s attention.

For all the positives brought about by the new design, these buds are still left in the wake of some rival in-ears when it comes to one key area: sound quality.