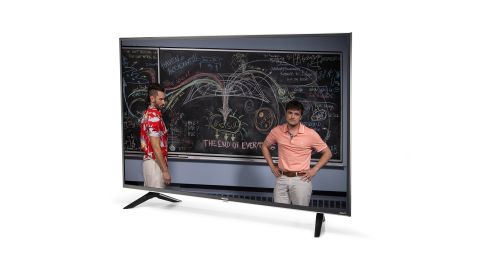 The Hisense R50B7120UK is the first Roku TV to land in the UK. The Roku platform has been available to UK users through the stick and box HDMI add-ons, but has never been built into a TV before.

Roku TVs are a big deal in the US, with a reputation built on a zippy and intuitive UI packed with over 8,000 apps. Roku’s focus is on making sure its smart offering is up to date as possible. Indeed, its US success comes partly from the speed at which it adds new services, which is a stark contrast to the TV manufacturers that occasionally withdraw app support from their models.

Of course the TV landscape is different on this side of the Pond. Key Roku services, such as YouTube TV and Hulu, don’t exist in Europe, so it's a good thing that this TV is about more than just Roku.

Hisense is a partner with a growing reputation, and the two companies have come together to produce a 50in, direct LED-backlit TV, with a 4K resolution, HDR support and all of the apps you could possibly need. And all at a staggeringly low price.

Best of all, this is one of those deals that's actually not too good to be true.

There’s something reassuring about the no-frills look of the Hisense R50B7120UK. The frame and rear are both dark grey plastic and there’s no hiding the fact with any kind of chrome-look finish. The stand is a pair of no-nonsense V-shaped feet and there’s a fairly even bezel of half a centimetre of so running around the screen.

Optical and USB sockets are present – one of each, along with three HDMIs and a headphones jack too. There’s really not much else one could ask for at this level.

At the heart of this TV, Hisense says, is a quad-core processor, and we’re delighted at the speed and ease with which the Roku interface operates. It never sticks when browsing the apps on the home screen, flicking through channels or switching inputs. It’s highly responsive, too, both when using the remote control or via the Roku mobile app.

The neat little remote strikes a judicious balance between features and complexity. There are shortcut buttons for the important services – Netflix, Spotify, Freeview Play, Google Play and Rakuten – but you’ll have to head to the menus for Amazon Prime Video and the many others.

The remote control app is almost as reliable. You can search for programmes, add channels, stream content from your mobile to the screen or just use it to control playback.

One impressive feature is the Private listening button on the mobile interface. Press that and the TV’s sound is routed through your device. Attach a pair of headphones (wireless or wired) to your mobile and you have a personal AV experience – great for late-night viewing.

Apps-wise, Roku is close to flawless. On top of those already mentioned, it comes with Apple TV, Disney+, Now TV and many, many more, most in 4K and HDR where available, with the 1080p SDR delivery from Google Play Moves & TV a notable exception. BT Sport is the only really significant app that's omitted entirely.

There are thousands of lesser known apps here, too, delivering almost any kind of content you’d wish for – golf, fishing, surfing, kung-fu, cinema and much more. There are plenty of premium services, including apps for sports teams (Manchester United, Manchester City, Green Bay Packers) or associations (NBA, NHL, NFL, ATP Tennis). It’s not complete, there’s no Formula 1 live app, for instance, but if it’s not on Roku, you’re unlikely to find it on any other TV smart platform.

Most recent is the addition of Roku Channel, which has been available in the US since 2017 but has only just launched on UK Roku devices. This brings ad-supported access to thousands of premium movies and TV series from over 40 content partners, including Lionsgate and Sony Pictures Television.

New apps are added weekly to the Channel Store – at the time of writing it includes lots of COVID-19 apps. There are also plenty of games, as well as themes and wallpapers for customising your experience. All in all, it has the feel of an Android mobile experience – no one’s going to struggle to operate it and it won't ever wind you up.

The only problem we have is that the operating system's universal search feature doesn’t come up with content available on catch-up services. So, you could end up paying to watch episodes of your favourite programme when they are free on iPlayer.

We start off with Kingsman: Golden Circle on 4K Blu-ray and we’re pleased to see that this TV is not spoilt by the kind of backlight bleed problems that plague many cheap sets. It’s a direct-lit LED panel that’s impressively even and consistent from edge to edge, and that makes for a solid canvas on which to produce the images.

The picture itself is good straight out of the box, too, though tinkering a little with the contrast, brightness and colour settings will yield even better results. Fortunately, the settings are clear and jargon-free, so you're unlikely to get lost in the menus.

One oddity in the settings is the lack of motion processing. We’ve seen plenty of TVs, including flagships, where the motion-processing tech is so badly implemented that it’s unusable anyway, so it’s far from a big loss. What’s more, whatever baseline motion processing this Hisense manages in the background is both impressive and effective. As ever, you’ll find a little judder if you look for it, but it never spoils our viewing.

There is no local dimming either, but you’d be hard pushed to find that kind of tech on a TV at this price. That given, it does a reasonable job of the white details of the snow of the Italian Alps scenes of Kingsman. There’s some differentiation in the bright sweeps over mountain peaks and texture to the frosted ground when the three agents battle with Miss Poppy’s henchmen outside an abandoned shack.

Between the black of the agents’ ski suits and the bright sapphire blue ski, there’s a really enjoyable impact and drama to this TV that makes it easy to watch. The trade-off is that it’s not as careful with contrast as some others but this feels like a very well chosen mid-point between dynamism and detail.

As we step down to 1080p with The Force Awakens on Blu-ray, we’re immediately impressed with this set’s scaling ability. Close-ups of the actors’ faces in the scene at Maz’s bar look just as revealing for detail as our 4K viewing. There’s a little shimmer to that detail with movement, but it’s a pleasing watch.

Colours are generally strong. The grass of Maz’s home world tends slightly towards an astroturf shade of green but, as with all of the faults on this TV, it’s really only a minor complaint and far from something that sticks in our craw, particularly given the price tag of the set.

Once the action switches to space we’re pleased to see a very strong sense of black depth for a TV at this end of the market. There’s an aubergine tinge to the darkness but you’d need to spend twice as much to get anything much deeper. As with bright areas, the choice for a more dynamic picture trades-off some of the dark details but there’s still enough to appreciate the dark underbelly of the star cruiser as it eclipses the planet of Jakku.

All TV pictures are a compromise and those compromises are always more pronounced at the budget end of the market. What’s superb about this set, though, is how well that compromise has been judged. It treads a tightrope between punch and finesse, within its considerable limitations.

It could easily be too lifeless or too artificial, but it never gets the image wrong enough to get in the way of what you're watching. Combined with decent viewing angles that mean almost everyone in the room will see the picture more or less as intended, it’s a laudable balancing act.

With two 7W speakers, the sound system on this TV is a little underpowered. We find some distortion beyond the halfway mark on the volume but, at sensible levels, it’s a balanced and easy listen.

Dynamics are limited, though, and there is little weight to the sound, meaning that there isn’t a huge amount of extra depth and definition to a blaster shot than there is to Kylo Ren’s computerised voice. However, on the plus side, everything is produced with enough clarity.

Spatially, there’s not an awful lot going on either, and effects are centred around the screen itself. There’s a little left to right movement as X-Wings chase TIE-fighters in the skirmish on Takodana. It’s enough to add to the tension and excitement of the sequence, but even a budget soundbar would make a big difference here.

The DTS TruSurround mode is worth using. Along with a low-to-medium setting of Dialogue Clarity, it gives the best compromise between the soundtrack, the sound effects and the voices. However, if you want to keep things simple, stick with the Normal or Theatre presets.

This is an extremely cheap TV and, as such, cannot compare to the quality of more expensive models. But, crucially, Hisense appears to have understood this television’s limitations.

Many TVs at this end of the market have huge problems that are hard to ignore, whether that’s terrible viewing angles or chronic motion processing issues. They often have woeful backlighting that spoils every frame they try to produce, and many of them suffer from all these at once.

The Hisense R50B7120UK avoids all of these classic pitfalls and offers a performance that never detracts from the on-screen drama. It’s a long way from being a masterclass in image quality but, given its very low price, it presents a pleasing compromise.

Throw in its full feature set, upscaling prowess and superb smart platform and out pops one of the best 50in TVs you can find for this kind of money anywhere right now. If this is your budget and this is your panel size, then consider your research done.