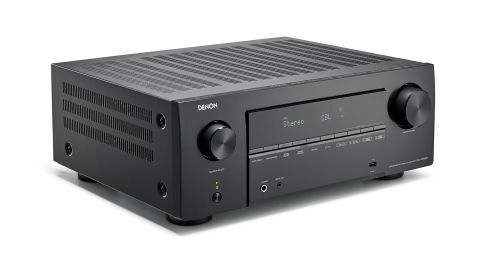 A surprisingly big improvement on its already excellent predecessor, the AVC-X3700H could well be the performance-per-pound pick of Denon's 2020 range

When you listen to class-leading products as often as we do, you know immediately when a new standard has been set. That said, sometimes it takes until you have a direct comparison with another superb product to comprehend just how high the bar has been lifted.

That is the case with the new 8K-ready Denon AVC-X3700H home cinema amplifier. While there may be a small part of us that would delight in the Japanese company messing up one of these amps – purely so we would have something different to write – the sonic improvement it has made on last year’s model is quite surprisingly marked.

The AVC-X3700H is perhaps the company’s 2020 model with most to lose, its predecessor having been named Product of the Year at the What Hi-Fi? Awards not 12 months ago, so it was paramount Denon took care while adding its new technologies.

The new HDMI section is perhaps most important in terms of future proofing; one of the AVC-X3700H’s seven inputs and two of its three outputs are full HDMI 2.1 sockets with support for 8K@60Hz and 4K@120Hz. All of its HDMI connections support HDR10+, Dynamic HDR and Quick Media Switching – which allows a source instantly to switch resolution or frame rate to eliminate screen blackout – alongside last season’s suite of HDR10, HLG and Dolby Vision.

In terms of audio, the AVC-X3700H retains the 11 channels of processing that were upped from seven on the last iteration of this model. There are nine power amplifier channels built-in, each feeding a claimed 180W of power per channel. That means you can set the AVC-X3700H up in a 5.2.4 or 7.2.2 Dolby Atmos configuration, or add an extra two-channel amp to make full use of the processing power with a 7.2.4 set-up.

Everybody will be able to make use of this amp’s 3D audio support, though – whether or not you have dedicated height speakers – which runs to Dolby Atmos, Dolby Atmos Virtualization Technology, DTS:X, DTS Virtual:X and IMAX Enhanced.

Those intending to use their home cinema amplifier for music playback as well can also take advantage of the AVC-X3700H’s hi-res audio decoding of files up to 24bit/192kHz and double-speed DSD. Just load them up via the network or this amp’s front panel USB input. Thinking of pairing it with a turntable? That built-in moving magnet phono stage is still a feature this year.

It’s worth noting that we've tested the AVC-X3700H, rather than the AVR-X3700H that is available in the US; the difference is the addition of an FM tuner in the States, with all other features being shared across the two versions.

Thanks to HEOS and Apple AirPlay 2 connectivity, there’s lots you can do without physically interacting with the AVC-X3700H; as well as unlocking multi-room capabilities, they enable use with Amazon Alexa, Google Assistant and Apple Siri.

But manually using these Denon amplifiers is part of what makes them so great. There is a remote control, which is fairly standard for the product at this price – everything you need and fairly robust – but it is about twisting those big round dials, which offer just enough resistance to satisfy without it being tough.

It’s testament to the AVC-X3700H’s bomb-proof build, and the sense you get from the moment you strain to lift it out of the box that you are getting more than your money’s worth.

But, despite that class-leading build quality, and though these contemporary new features are the main reason home cinema amps are updated so regularly, these are far from the main selling points as far as the AVC-X3700H is concerned.

After quarter-of-an-hour or so of letting the Audyssey MultEQ XT32 calibration tech do its work, and a bit of manual fine-tuning, this new Denon bursts into life, grabbing our attention and holding it tight for the duration of our testing. (Important note: while our review model was already well run in, a new one will need a good 24 hours of warming up straight from the box.)

The energy of the performance is immediately striking. There’s greater muscle than before, but it is also even more lithe and better defined. It’s a combination of solid dynamic expression, which enthuses each vocal line as much as differentiating one gunshot from another, a sharper punch and greater clarity that allows you to get deeper inside the soundtrack and become more immersed.

The scale and authority is mightily impressive for a home cinema amp costing a smidgen less than a grand, but Denon has still managed to get the basics right, too. There is plenty to feed our two subwoofers, but you wouldn’t say this is a particularly bassy mix; rather it is well balanced, open at both ends, and smooth throughout its frequency range.

It remains engaging at low volumes, too, which will please the neighbours once you’ve had enough of turning it right up and wondering at how its composure remains intact.

Most of our testing is done with the amp’s Pure Direct mode, which gives us the cleanest, clearest and most precise performance. The quality of its presentation here though means you can engage some of the height virtualisation software and not lose too much in the way of focus.

In fact, the way these technologies are implemented is really rather impressive, giving height but also a smoother wrap around of surround effects. We’d probably always go for these off, adding height channels only when we have the correct speakers, but the quality of the tech here makes it rather a matter of preference.

We would also suggest finding a dedicated stereo amp for your music playback, too, but the Denon is still rather impressive as far as sub-grand home cinema amps are concerned. That detail and punch are still there, as is a good deal of dynamic expression; it isn’t hi-fi, but we have tested worse components for whom this is their only job.

So on one hand, we’ve had to write the same review about a Denon home cinema amplifier for about the sixtieth time. On the other, however, we’ve been able to spend a few days with the best unit we’ve ever heard with a three-figure price tag.

If you have the system to match it with, the AVC-X3700H is another Denon effort that will happily last you many years.