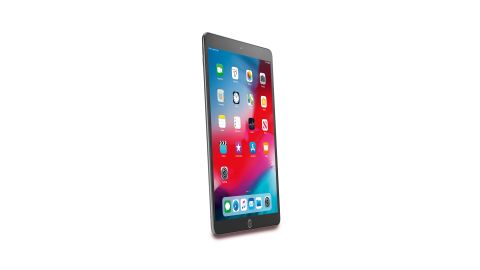 If you’re in the market for a tablet for movies and music on the go, there isn’t currently anything better out there

The iPad Air occupies an unenviable position in Apple’s tablet range. It’s the model with arguably the least obvious USP – the standard iPad is cheaper, the iPad Mini is smaller and the iPad Pro is for professionals.

So, what’s the Air’s big selling point? It’s not the thinnest iPad, nor the most stylish (on both counts, that’s the iPad Pro 11in), but what makes it special is that it represents the true sweet spot in the current range.

At first glance, the iPad Air is more or less indistinguishable from the standard iPad.

The Air has identical height and width measurements to the iPad, it also features a ‘home’ button integrated into the bottom bezel and a tiny camera in the top, and has a larger camera in the top-left corner of the rear.

Button placement is the same as on the iPad, ditto the 3.5mm headphone jack, and both have a Lightning connector flanked by stereo speakers on the bottom edge.

Look closely, though, and you’ll see that the Air’s front bezels are just a touch slimmer than those of the standard iPad. That’s because the screen has expanded from 10.2 to 10.5in without the device getting any bigger.

The only measurement that has changed is depth – the Air is 6.1mm thick as opposed to 7.5mm – and it’s about 30g lighter, too.

While the iPad Air’s screen is a little bigger than that of the standard iPad, the resolution has been increased in order to maintain a pixel density of 264ppi. It also gains full lamination, an anti-reflective coating, wide colour support and True Tone, making it more usable in bright conditions.

The Air supports HDR (including Dolby Vision), and its brightness and colour performance can be set to automatically adjust to ambient lighting. It’s worth pointing out that all of these screen features are also available via the iPad Mini (which also has a higher pixel density of 326ppi), but that model’s display is significantly smaller than the Air’s.

Unlike the standard iPad, which has to make do with an older processor, the iPad Air (and Mini) gets the newer A12 Bionic chip. Though no current iPad feels slow in use, you can expect an A12-powered model to feel snappier for longer.

All current iPads now run iOS 13, which will be familiar to anyone who uses an iOS device. This most recent version is focused on improving performance and efficiency, but it also introduces niceties such as Dark Mode, which gives the whole interface a moody and less intense makeover, and an overhauled Photos app.

It’s not a huge departure from previous versions of Apple’s operating system, but iOS remains a fluid and intuitive platform that’s jam-packed with apps.

Heading straight to the Apple TV app and its peerless pay-as-you-go selection of 4K HDR films, we select Once Upon A Time In Hollywood and are immediately impressed. The opening montage of Bounty Law clips may be monochromatic, but it still gives a great sense of the sharpness, detail and punch offered by the iPad Air.

It’s just such a crisp and insightful picture, but the old-school grain is also maintained – Tarantino’s blend of new and old cinematic aesthetics is effortlessly delivered by this tablet.

As the ‘real’ action begins (in Dolby Vision, no less), the Air proves itself just as capable with colours, delivering the warm, cosy palette without pushing things into over-saturation.

It also handles the tricky motion of cars cruising LA’s streets and reveals lots of detail in the dark corners of the restaurant in which Leonardo DiCaprio’s Rick Dalton initially meets Marvin Schwarz (Al Pacino).

The Air is a cut above the standard iPad here, and while the Mini’s smaller size and higher pixel density makes it a little crisper in its delivery, the Air’s larger screen makes for the more cinematic on-the-go experience.

We switch to a Full HD download of Raiders Of The Lost Ark and the performance is once again exemplary.

The Mini is still more solid and even a little brighter at times, but the Air is otherwise the same brilliantly judged and controlled picture on a significantly larger scale.

It’s a shame that the iPad Air, like the iPad and iPad Mini, has its stereo speakers on the bottom edge in portrait, as the sound emerges from just one side when you’re watching a movie in landscape, but you’ll probably be using headphones most of the time anyway.

Plug a quality pair of headphones into the Air and you’ll get a brilliantly crisp, punchy and dynamic delivery, one that’s actually more open and weightier than that of the Mini. There’s a deeper and slightly more pronounced bottom end that makes tracks even more solid and authoritative.

We wouldn’t recommend using the integrated speakers for music on account of their tonal narrowness and lack of volume, but if you use them to watch a TV show or play a game, you will at least find them clear and fairly punchy.

It might not instantly appear so, but the iPad Air is the pick of the current iPad range. It is more affordable than the Pros and only a little more expensive than the much smaller Mini, and while it does command a fair premium over the entry-level iPad, its better screen and potentially longer useful life more than justify the extra outlay.

If you’re in the market for a tablet for movies and music on the go, there isn’t currently anything better out there.