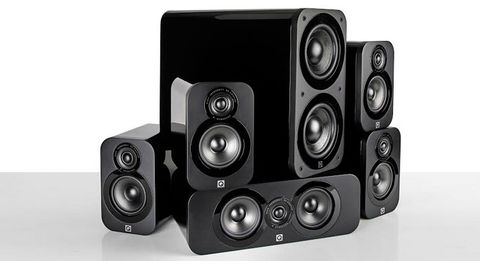 Q Acoustics does it again: this surround package offers extraordinary value for money

Few manufacturers have such a consistent record of punching above their weight as Q Acoustics. Since arriving on the scene less than 10 years ago, the company has amassed a disproportionate number of our Awards, many of which went to the 2000i series.

Our first experience of the new 3000 series – the 3020 standmounters – was a positive one. What we have here are two pairs of the smaller 3010 standmounters, along with the 3090C centre speaker and the 3070S subwoofer.

The design of the 3000 series takes lessons from Q Acoustics’ premium Concept series. The new cabinet benefits from double-layered top and front panels, along with improved internal bracing. The idea, as it was with the Concept 20 and 40, is to create a low-resonance cabinet.

There are new drivers too. The ‘2 in 1’ concentric ring dome tweeter aims to combine the best properties of ring radiator and dome type designs to deliver highs with low distortion and wide dispersion.

The whole assembly is decoupled from the main enclosure structure by butyl rubber, which isolates it from unwanted vibrations and, in theory, produces a purer sound.

As for the mid/bass driver, the cone material has changed from a paper/mica mix to a blend of paper and Kevlar.

Instead of the typical cube design of subwoofer, Q Acoustics’ offering is somewhat unusual – tall, thin and rather deep, with twin, front-firing 17cm drivers.

As we’ve come to expect from Q Acoustics, construction feels very solid. The 3000 series comes in Matte Graphite or American Walnut finishes, but you can pay extra for glossy black or white lacquer, or even ‘leather effect’.

This package offers a rounded sound, occupying a comfortable spot between excitement and refinement. It’s a hugely insightful sound, packed with the subtlest of textures. If you’re after a nuanced listen, this is it.

We found ourselves noticing the smallest, most insignificant noises, like a quietly ticking clock in the corner of Michael Keaton’s dressing room in Birdman.

As the soundtrack gets busier with layers of speech and jazz drumming, speakers demonstrate remarkable organisational skills. What you hear is clear and controlled, and far more precise than you might get from lesser rivals.

There’s a good deal of attack, too. The package is not overly polite. The dragon attack scene of The Hobbit: Battle of the Five Armies has all the fiery bite and excitement needed to convey a sense of danger.

The soundfield is impressively tall and wide, especially given the compact dimensions of the speakers, and you’ll have no problems filling small to medium rooms.

It’s not an entirely flawless package, however. It’s slightly let down by the subwoofer, which sounds a little soft. It needs better definition and control to put out the taut, punchy bass that we’re after. It’s far from disastrous, however.

Overall, Q Acoustics’ latest continues the company tradition of punching way above its weight. For the money, what you get is extraordinary.