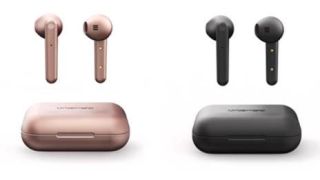 When true wireless earphones show up in our inbox looking vaguely familiar, in rose gold, and with a budget-friendly price tag - we get interested.

Swedish brand Urbanista has just launched the Urbanista Stockholm earbuds, yours for only a little more than Apple is asking for the AirPods' wireless charger alone, which certainly sounds tempting.

With four colours (aside from black and white there’s a more-attractive-than-it-sounds olive green) plus a wireless charger chucked in for good measure, they’re also Android and iOS compatible.

The charging case itself is as svelte as its giant competitor – although it opens more like a suitcase, not like a backpack – and offers three extra charging bumps of three hours apiece.

Granted, the new Urbanista Stockholm buds won’t know when you’ve removed them from your ears, and in turn pause the music for you, but you can still have a bark at Siri (or indeed Google Now) thanks to dual microphones in the right earbud. These mics also take care of noise-cancellation.

The Urbanista Stockholm wireless earbuds are on sale now for £89/$99.