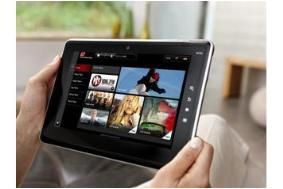 The rise of the tablets continues unabated, with the Toshiba Folio 100 the latest tablet to come on sale in the UK.

The new device supports Flash web browsing, has access to apps via the Toshiba Market Place and has an HDMI output with support for 1080p video.

For more details on the Toshiba Folio 100 tablet, see our original news story below.

We've got more information on Toshiba's Folio 100, the latest tablet to join the party here at IFA alongside Apple's iPad and the Samsung Galaxy Tab.

The device comes with a selection of applications pre-installed, including Opera Mobile web browser, FBReader (e-book reader), Adobe Flash 10.1 and Fring, an app that combines with the built-in webcam to enable video calls.

Powering Folio 10 is a Nvidia Tegra 2 processor, and there's 16GB of onboard storage – further expandable via SD card.

The Folio 100 will be available in Q4 of this year for £329. A 3G version will follow soon afterwards.

You can find out more about Toshiba's new product launches at IFA in our earlier news story.