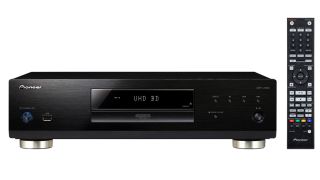 Deciding on your home cinema set-up's most crucial component is a delicate matter. Get it right, though, and cosy nights in will be nothing short of joyous. Obviously, Blu-ray discs mean you'll get to watch not only the juiciest of director's cuts, but all the 'making of's, blooper reels, deleted scenes, alternate endings, commentaries and tasty Easter eggs your favourite flick can throw at you.

We've cued up scores of Hollywood blockbusters in our quest to find this trio of excellent Blu-ray players, aka your What Hi-Fi?-Award-winning class of 2019.

So, we've brought the player. That means you're doing pizza and popcorn, right? Oh, OK never mind. Here they are...

If you think a £250 budget for such a vital piece of kit means the best in Blu-ray lies somewhere beyond your reach, think again. The Sony UBP-X700 was our Product of the Year in 2018 – and that was at a smidgeon over £250.

Right now, twelve months on, you can grab one of these excellent budget 4K Sony Blu-ray players for less than £200. With Dolby Vision HDR and an incredibly vivid picture, it's little money – and you'll get to spend it with a lot of class.

Up a price-point, the best sub-£500 4K Blu-ray player on the market comes with the (admittedly forgettable) moniker Panasonic DP-UB820EB. A first-time winner, it offers HDR10, HDR10+ and Dolby Vision support straight from the box. The same can’t be said for several rival players at the price, which is just one of the reasons the Pana runs off with the gong.

Yes, justifying a £1000 investment on a Blu-ray player is a tough ask. One evening spent with the Pioneer UDP-LX500 should do it, though. Another new face, it hails from strong stock – we’ve given five stars to many of Pioneer's premium Blu-ray disc spinners over the years. Now, thanks to the UDP-LX500, we'll happily add a 4K Blu-ray player to the list.

The Pioneer is a solid, stable, sturdy bit of kit – a solid first sign of its not-insignificant price. To help reduce unwanted vibrations, there's a double-layer chassis reinforced with a 3mm steel plate, for example – sound premium to you?

Pioneer's 4K player is just as accomplished with audio as it is with video, so if your budget allows it won't disappoint.

Which of the three will win the What Hi-Fi? 2019 Product of the Year though? Oh, we'd love to tell you. And we will... on the evening of Tuesday 5th November, when our annual Awards ceremony will be held.

Looking to start a new home cinema system from scratch? You should probably check the Award winners in our best TVs, best soundbars, best home cinema amp and best speaker package categories too!