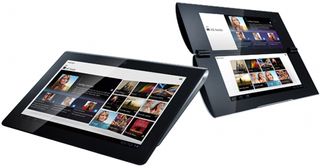 Sony has confirmed it will launch two Sony Tablet portable devices later this year. They will run the latest Android 3.0 software, designed especially for tablets.

There will be two devices, both scheduled for release this Autumn: a 9.4in device, codenamed S1, and a dual-screen device with two 5.5in screens, the S2.

Both tablets will be "wi-fi and 3G/4G" compatible and will come bundled with access to Sony's Qriocity music and video store and Sony's Reader Store for eBooks.

PlayStation Suite will also give users access to first-gen PlayStation games on their Tablet.

More news on these new devices as and when we get it; the fact that the images are plastered with "design and specifications are subject to change without notice" suggests there could be plenty of twists the Sony Tablet story as yet...