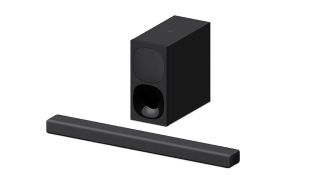 The Sony HT-G700 is a 3.1-channel Dolby Atmos soundbar and subwoofer combination complete with an affordable price, costing just £450 ($600/€540). Why so much cheaper than other Atmos soundbars? Well, the Atmos is delivered by far fewer speakers than more expensive models.

Sony’s Vertical Surround Engine aims to help the HT-G700’s front three speakers create up to a 7.1.2-channel surround sound – that is, a surround sound with a sense of height as well as width – in the absence of physical upward-firing and rear speakers. Sony says the signal processing has been improved over Sony’s 2019 2.1-channel HT-XF9000 to deliver surround sound to a wider area, too.

With the HT-G700, Sony also claims to have focused on widening the surround sound effect, by enhancing signal processing, and improving dialogue clarity, by introducing a dedicated centre speaker.

Sony is behind some of the most impressive Dolby Atmos soundbars out there, the HT-ST5000 and HT-ZF9. Its latest model hopes to extend the company's decent run of form, but at the cheaper end of the market.

So it can receive high-quality Dolby Atmos and DTS:X soundtracks from a connected TV, the HT-G700 has HDMI eARC connectivity, in addition to Bluetooth for simple streaming from a smartphone or tablet.

A press of the Immersive AE (Audio Enhancement) button can ‘upscale’ regular stereo audio to up to 7.1.2 surround sound, while Sony’s S-Force PRO mode can ‘lift’ sound higher to cover the top of larger TVs (Sony says over 55 inches). The more commonplace Cinema, Music, Night and Voice modes are also present to tailor the presentation to your content or preference.

Last but not least, an external wireless subwoofer brings the brunt, designed to produce a rich, deep bass that complements the bar’s performance.