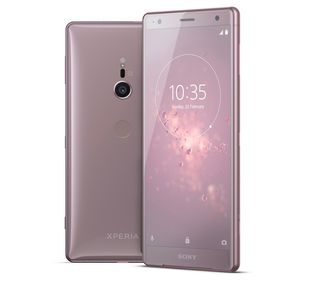 Sony has pulled the covers off two new smartphones at its press conference at MWC 2018.

Announcing the flagship Xperia XZ2 and its smaller sibling, the XZ2 Compact, Sony has built both to deliver a range of immersive experiences, with steps forward in camera, display and audio technology, and all in slicker, more stylish design.

The XZ2 is the larger of the pair, and takes on the popular 18:9 screen ratio, allowing it to squeeze a larger 5.7in full HD+ display into a smaller body than last year’s XZ1.

This display supports HDR content for mobile, but also boasts the ability to upscale SDR content to near-HDR too, whether you’re streaming from Netflix or watching downloaded content.

While Sony’s Motion Eye camera looks to remain the same as last year, offering 19MP for the main snapper and 5MP for the selfie cam, there are also a few new additions here that set it apart.

The biggest of all is the ability record video in 4K HDR – the world’s first smartphone to do so – but also the ability to record super slow-motion video at 960fps in full HD (last year’s effort maxed out at 720p).

High-quality audio has also been one of Sony’s strong suits when it comes to smartphones, and its long-standing support for high-resolution music stands in both of its new handsets.

This is supported by Sony’s LDAC technology, for better wireless sound when using with compatible headphones, as well as Sony’s DSEE HX processing for upscaling less-than-perfect sound.

The only catch? Following the likes of Apple, Google and Huwaei, Sony has ditched the 3.5mm headphone jack here, so you’ll need a pair of USB-C or wireless headphones. We’re hoping there might be some of the former in the box, but if you’re really stuck, the stereo speakers on the XZ2 are apparently Xperia’s loudest yet.

Elsewhere, the XZ2 introduces a new Dynamic Vibration System, which means the phone acts a little like a PS4 DualShock controller, analysing the handset’s audio data and delivering haptic feedback to suit. This will work across movies, games and music, and its intensity is customisable, or can be turned off completely should you prefer.

In terms of specs, the XZ2 packs Qualcomm’s flagship Snapdragon 845 processor and 4GB of RAM, with a respectable 64GB of on board storage (plus microSD) and a large 3180mAh battery that supports wireless charging.

As for its little brother, the XZ2 Compact offers a smaller 5in screen in the same 18:9 ratio as the XZ1, dropping down to full HD in resolution but gaining the bragging right of the world’s most compact 5in phone.

Aside from its screen size, you’d be hard stretched to find too many more differences between them though. The Compact plays snap on the majority of the XZ2’s core specs, but does have to drop wireless charging due to its polycarbonate finish.

It also doesn’t support the Dynamic Vibration System either, due to its size, and comes with a slightly smaller battery too.

That still means 4K HDR, HDR upconversion and 960fps slow-mo recording in HD are all in though, so if you want all of the phone but less of the bulk, the XZ2 Compact could well be worth a look.

Both handsets will be available in March, with prices yet to be confirmed.