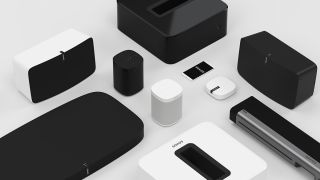 Sonos looks set to announce a new wireless speaker some time soon, after details of a new product were revealed in an FCC filing. The product name wasn't revealed, the filing instead referring to a Sonos S18 satellite speaker, but some features were confirmed... although they don't give much away.

Naturally enough the filing shows compliance for wi-fi and Bluetooth. While Bluetooth streaming would be a first for Sonos, the inclusion here is instead likely to be for set-up purposes rather than wireless music.

Elsewhere, Variety spotted the new speaker was tested alongside the Playbar soundbar, and so suggested the speaker could be designed especially for use in a Sonos cinema system. A smaller satellite speaker for surround sound channels? Possibly. Or even a Dolby Atmos compatible speaker? Probably a long shot, not least as none of the soundbars support Atmos (and Sonos isn't convinced).

We think it's more likely that the speaker is a new version of an older Sonos speaker: the Play:3. The mid-sized speaker in the family was released back in 2011 and now looks a little dated. A new design, complete with touch buttons and voice control in line with the Sonos One, would make a lot of sense. The Sonos Three, then?

The existing One, Play:1, Play:3 and Play:5 can all already be used alongside the Beam, Playbar and Playbase as surround speakers for a cinema system, which would explain the Playbar testing.

While CES 2019 might be a little too soon for an announcement, it seems we may not have too long to wait until we see something new from Sonos.

Sonos One 2-speaker bundle £348 at Sonos.com
Save £50 on the price of two Sonos One voice speakers, when you buy them together. Sonos' smartest speaker is a brilliant option and with two you're on the way to a serious multi-room speaker system. View Deal