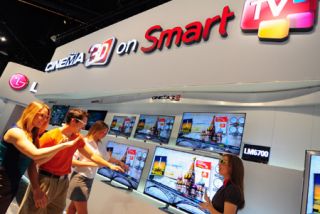 Every TV manufacturer at CES 2012 made a big song and dance about their new smart, internet-enabled TVs. But it seems the UK public remains rather non-commital about this latest technical innovation.

According to YouGov, smart TV ownership (ie a TV connected to the internet) increased by just 1% between December and January.

And a YouGov survey in November 2011 found that while 1 in 10 people in the UK owned a smart TV, only 15% of consumers said they'd buy one in the next 12 months.

Manufacturers must be hoping that smart TV sales in 2012 will be stimulated by key events such as the launch of Netflix and Google TV in the UK, as well as big sporting events like the Olympics.

YouGov's research also found that games consoles such as the PS3, Xbox 360 and Nintendo Wii were the most popular way of accessing internet TV content, rather than directly through the television itself.