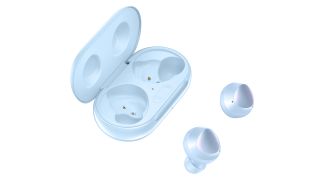 Looks like Samsung has some new true wireless earbuds in the works - but these  will look a little different to those that have gone before. While the Galaxy Buds and Galaxy Buds+ both stick with the AirPods-style design, this new model will ditch the earbud stems, so they resemble jelly beans, or kidney beans, if you prefer.

Samsung is apparently well aware of this. According to WinFuture (who broke the news and created the below render), their internal code name is Beans.

The new buds are apparently 2.8cm long, with no silicon tips, which could lessen the effect of noise-isolating/noise-cancelling tech.

They're still at an early prototype stage, but we could see them launch alongside the Galaxy Note 20 later this year. Samsung usually unveils its next Note handset at the end of August/beginning of September each year.

They would follow hot on the heels of the Galaxy Buds+, which only launched last month. But, like their predecessors, they received a rather lukewarm reception from reviewers (we awarded them three stars out of five). Maybe Samsung is hoping to banish that as a distant memory by releasing an upgraded version sooner rather than later.