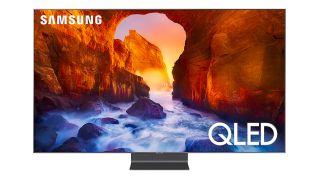 At the start of the year we got thoroughly hands-on with Samsung’s then-unnamed flagship 2019 4K QLED TV, concluding that it ‘could well be an OLED-beater’ thanks to improved backlighting, viewing angles and colour vibrancy over the 2018-headlining QF9N.

It’s only now, however, that we have model names for the 2019 4K flagship – the Q90R (pictured top) – as well as for the rest of the forthcoming QLED line-up.

The currently available next-gen Samsung 4K QLED TVs can now be ordered from Samsung US, with shipping beginning in March.

UK pricing and availability, as well as any further sizes, will soon follow.

The main criticism of the Q9FN (and QLED as a whole), particularly in comparison to its OLED rivals, is viewing angles, so invariably Samsung is tackling that in its Q90R and Q80R TVs by introducing ‘Ultra Viewing Angle’, engineered to reduce glare and enhance colour for optimal viewing from any angle.

The new QLED sets can allegedly produce 100% of the DCI-P3 colour space, while various levels of Quantum HDR technology aim to optimise HDR content. On that note, all Samsung 2019 QLED TVs will feature HDR10+.

The Q60R, Q70R and Q90R also feature ‘Ambient Mode’, which essentially allows owners to efficiently display info (such as the time), photos, décor patterns or artwork on the screen when they aren’t watching TV. The screens can even blend into the pattern and colour of the wall it’s attached to or sat in front of, too.

They also keep the thin cable connection to a separate One Connect Box that powers the TV and houses the various inputs and outputs. The familiar OneRemote now has Amazon Prime Video and Netflix shortcuts, too.

2019 Samsung Smart TVs will also work with Amazon Alexa and Google Assistant voice assistants as well as Samsung’s own Bixby voice platform. And as we learned at CES last month, Samsung has also struck an exclusive deal with Apple to feature the iTunes Movies and TV Shows app on its 2019 TVs, and equip them with Airplay 2.

Samsung seems to have evolved its QLED offering in everything from picture performance to smart offering, then, so the burning question is: could 2019 be the year it finally topples rival OLEDs? Needless to say, we look forward to finding out very soon.