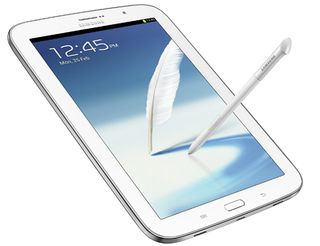 Samsung has launched the Galaxy Note 8.0, an 8in tablet that comes with the S Pen stylus and a number of new apps and features.

Joining the growing number of tablets at this new midway screen size, including the Google Nexus 7 and Apple iPad Mini, the Note 8.0 has a few tricks up its sleeve to seperate it from the crowd.

There's a microSD card slot, too, a whopping 4600 mAH battery, and the promise of a 3G model as well as a WiFi only model.

The S Pen, Samsung's stylus attachment also seen on the other Note products, comes integrated in to the Note 8.0 – simply pull it out to activate a host of S Pen specific apps.

Samsung is a promising a better evolved version of the S Pen all round, with deeper integration thanks to features such a Page Buddy, which activates your most recent note when you remove the S Pen, and Pen Detection, which suggests better ways for you to navigate the Galaxy Note 8.0 when the S Pen is in use.

Samsung also looks to have improved a number of features first launched on the Galaxy Note 10.1 tablet. Pop Up Note and Pop Up Video use the multi-tasking feature to allow you to use the screen for more than one task at a time, say with video running on top of the web browser.

Dual View splits the screen in two, again allowing you to make better use of the screen with multiple apps and features.

There's a new Reading Mode, too, which automatically adjusts the screen settings for optimum reading conditions for eBooks, while Smart Remote allows you to connect and remote control your TV, set-top box or Blu-ray player, provided they're compatible.