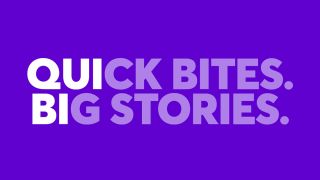 A new streaming service is in town, and you have to feel for it. Quibi never intended to be a rival to Netflix, Amazon or YouTube, instead hoping to offer short videos (or "quick bites") to entertain people during, say, a commute or work break. The catalogue of the short-form, mobile-only streaming app is solely comprised of videos 10 minutes or less in length.

But despite the Coronavirus pandemic – a time in which commutes and work breaks aren't parts of many people's daily lives – the US company's founder Jeffrey Katzenberg (Hollywood film producer) and chief executive Meg Whitman (former Hewlett Packard CEO) have chosen to stick with its April launch date. And for that reason, it's now vying for people's at-home time as much as its big-screen rivals.

As of the yesterday (6th April), the $1.8bn service is live with a catalogue of over 50 shows – 'Movies in Chapters' (films broken into clips between seven and 10 minutes), 'Daily Essentials' (five-to-six-minute news and entertainment snippets) and 'Unscripted and Docs' (fictional and factual programmes shorter than 10 minutes).

Not surprising considering Katzenberg's involvement, there are plenty of big names attached to content. Steven Spielberg and Guillermo del Toro have titles slated for release on Quibi. The most high-profile programmes available now include Chrissy Teigen's Chrissy's Court, in which she presides over small court disputes, and Punk’d, which sees Chance the Rapper revive the popular MTV series. Then there's the Jennifer Lopez-produced Thanks a Million, an "emotional and inspiring series" that features grateful public figures who kickstart a chain of kindness by gifting $100,000 to an unsuspecting individual who must pay it forward.

With new programming appearing every week, Quibi plans to have 175 shows in its catalogue by the end of the year.

The service launched in the US yesterday with an intention to roll out to other markets gradually. However, the Quibi app is already available to download in the UK. A 90-day free trial can be kicked off now, after which it appears that UK users will have access only to the £7.99-per-month, ad-free tier.