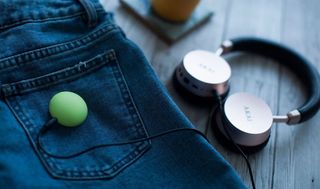 Its debut Indiegogo product was the Smart Buckle – a watch strap that turns any timepiece into a fitness tracker – and now the Gooseberry’s second project, which makes any headphones wireless “in less than 60 seconds”, has also been fully backed.

The pebble-shaped Poppins connects to any 3.5mm audio jack (whether your headphones or a system) and transmits music from your phone or tablet over Bluetooth.

The claimed battery life is seven hours, making it something akin to a portable Google Chromecast Audio – although whether it sounds as good is yet to be heard.

With a click of a button, two Poppins can also be paired to a single device so that you and your friend can listen to the same music together. You can also enable hands-free calling.

Poppins comes in blue, green, red and brown colours, and comes with a magnetic clip so you don't lose it.