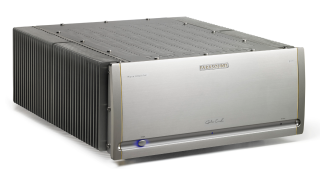 Parasound has a new flagship mono power amplifier, the JC 1+. This release is significant because in the 16 years since renowned amplifier designer John Curl created the circuit for the original JC 1, it remained unchanged: the very last JC 1 to come off the production line in 2019 was identical to the first one that rolled off in 2003. There were no circuit changes, no ‘MkII’ models… nothing, at least until now.

According to Richard Schram, of Parasound, the impetus for the new design was the appearance of an increasing number of ‘difficult to drive’ loudspeakers on the market, and Jack Bybee’s invention of a noise filter called the 'Music Rail’.

The concept was to build an even higher-powered amplifier that could deliver more current into low-impedance loads, with a lower noise floor than the original JC 1. And since the new JC 1+ is rated with a power output of 1300-watts into 2Ω, a peak current capacity of 180-amps and a signal-to-noise ratio of >122 dB, it would seem as though the two have achieved their aim… not least because Parasound claims the new JC 1+ will remain stable even at impedances below 1Ω.

These rails are fitted with Bybee Music Rails, which are high-frequency noise filters that can provide up to 45dB of noise suppression, limiting the noise floor to less than 20nV/√Hz. “These ingenious and patented devices were conceived by Jack Bybee and invented by an eminent microwave engineer and audiophile in collaboration with Curl and noted circuit board designer Carl Thompson,” said Schram. “The JC 1+ is the first commercial product to employ these remarkable devices.”

The output stage power supply uses a 2.1kVA toroidal transformer that supplies a filter bank comprised of six 33,000µF Nichicon Gold Tune capacitors, for a total capacity of 198,000µF. “Gold Tune capacitors are among the finest capacitors ever designed specifically for high-end audio applications and although these GoldTune capacitors were discontinued years ago, Nichicon continues to manufacture them exclusively for Parasound,” Schram told Australian Hi-Fi Magazine. (By way of comparison, the original JC1 has only a single power supply that used only four capacitors for a total capacitance of 132,000µF).

Parasound’s new JC 1+ uses the same 15-amp, 60HzMz Sanken bipolar output transistors as the original JC 1, but whereas the JC 1 had only 18 of them, the new JC 1+ has 24. This means that in addition to delivering 1300 watts into 2Ω, it can also deliver 450 watts into 8Ω and 850 watts into 4Ω. All these output figures are higher than for the JC 1. Also new is a toggle switch that can be used to select either a gain of 29dB or 23dB. Curl says gain adjustment can minimise residual noise when the JC 1+ is used with a high-gain preamplifier or with highly efficient loudspeakers.

Like the original JC 1, the new JC 1+ has a rear-panel toggle switch that allows you to bias the output transistors so they operate in pure Class-A mode up to an output of 25 watts before switching to Class-A/B mode, or reduce the bias so they switch from Class-A to Class-A/B at an output power of 10-watts. The low-bias mode reduces power consumption and also the heat-sink temperatures.