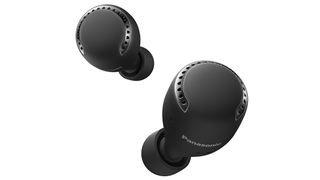 Panasonic has officially launched its first pairs of true wireless headphones on the same day as its first Technics pair.

The former utilises some of the tech found inside the Technics, such as Dual Hybrid Noise Cancelling Technology, which is achieved through the combination of both feedback and analog and digital processing. An Ambient Mode that amplifies surrounding noise so that the user can briefly hear conversations or announcements is also present and correct.

The RZ-S500W also uses beamforming technology through the use of two microphones to increase the clarity of voices and suppress ambient noise during calls. The RZ-S300W's lack of noise-cancelling ability allows them to be more compact (just 17mm in diameter) and sport a longer battery life: 30 hours (7.5 from the buds, 22.5 from the charging case), compared to the RZ-S500W's 19.5 hours (6.5 from the buds, 13 from the case).

Otherwise, the two pairs are much the same. Both benefit from a unique Bluetooth antenna that is designed for stable connectivity and, to help minimise earbud size, integrated with touch sensors for playback control. Both support Amazon Alexa, too: touch sensor support for Alexa will be added later this spring but in the meantime it can be activated from the Alexa app.

The Panasonic RZ-S300Ws and RZ-S500Ws - available later this month in black, white or green 'splashproof' finishes - are priced more or less in-line with the class-leading Cambridge Audio Melomania 1s and Sony WF-1000XM3s respectively, so we look forward to hearing how they fare.