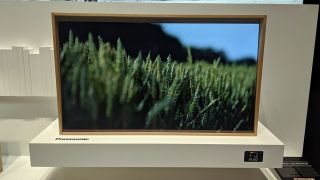 Panasonic’s TV booth at IFA is sparkling with its array of GZ OLED TVs, but one rather interesting set outside of the brand's 2019 line-up has caught our eye. The Transparent OLED is a prototype lifestyle TV – a conceptual project by Panasonic and Swiss furniture company Vitra – that, as its name implies, comprises a see-through OLED TV panel (reminiscent of a pane of glass when turned off) framed in an attractive wooden structure that doubles as a stand.

The display has been designed to resemble a glass cabinet, with the purpose of demonstrating “how new technologies can be used to seamlessly integrate audiovisual devices into our living space.” It’s a concept LG and Samsung has been dabbling with in recent years too with their respective transparent and framed TVs.

We’ve seen a prototype of the Panasonic Transparent OLED before, but the version we spied today, unveiled at this year’s Milano Salone, benefits from the progress Panasonic has made to the picture quality – notably in contrast. The TV brand has added a black dimming filter to produce deeper blacks than it was previously capable of.

It isn’t finished, and it’s far too early for specs and pricing, but Panasonic has today said it plans to launch a production-ready model next year. It’s perhaps one to look out for at CES in January, then.