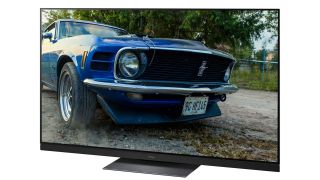 When it came to TV announcements at CES 2019 last month, Panasonic chose to focus exclusively on revealing its flagship GZ2000 4K OLED, rather than rush to compete with its peers in the 8K TV market, or unveil further 2019 4K models.

Then, it allowed the Technics SL-1200/SL-1210 MK7 turntable launch to share half of the company's show spotlight. And this afternoon, at the annual Panasonic Convention, it meant there was lots of new, never-seen-before products for Panasonic to talk about for the first time.

Panasonic has just shed light on the rest of its OLED TV line-up for 2019 - and altogether it's double the size of its 2018 one, with eight models across four ranges.

They too use Panasonic's HCX Pro Intelligent Processor and support both HDR10+ and Dolby Vision, rival HDR formats that before this year haven't appeared alongside each other in TVs.

The new ranges join the flagship in their support for Dolby Atmos, too, and the GZ1500 has its own Blade Speaker built directly into the TV's base.

The GZ2000 range is the only one with an upward-firing speaker configuration, though. The GZ2000 also stands apart from its OLED companions with its Professional Edition 4K OLED panel, exclusively customised by Panasonic's R&D engineers.

Amazon Alexa and Google Assistant compatibility means every 2019 Panasonic OLED set can be voice controlled, too.

While the GZ2000 remains, in Panasonic's words,  the 'most complete' TV it has ever made, we're pleased to see well-equipped models further down the range too.

As all three new OLED ranges use the same panel and processor, the difference between the them comes down to aesthetic and sound quality discrepancies. While the GZ1500 has a front-firing array of speakers below the screen, the GZ1000 and GZ950 have inferior downward-firing configurations. The former has a brushed aluminium L-shaped stand, designed to match the design of the company's soundbars, whereas the latter has the most basic base in the OLED line-up.

We can expect differences in pricing to be fairly insignificant, then, although what that is under wraps for now - Panasonic hasn't chosen today to confirm its 2019 TV prices.

As for the LED models, there are three ranges: the GX920, GX800 and GX700 - which offer various screen sizes between 40in and 75in and will be available in from spring.

Save for the entry-level X700 range, all models also support Dolby Vision, HDR10+, Dolby Atmos, and voice assistants by Google and Amazon.

The flagship GX920 (or GX940 in the EU) LED model – only available in 75in – is, like the OLED screens, powered by the new HCX Pro Intelligent processor.